When science is at stake, you have to be willing to fight dirty, and Tesla and Edison are throwing everything from cannons to lasers and more at each other in the war for electrical dominance! NSBrotherhood's Tesla: War of Currents is sort of a reverse tower-defense realtime strategy game like Villainous. You're in charge of building robots to protect Tesla as he blasts his way through Edison's defenses, clicking the arrows along the way to direct his path and deploying repair zones to keep everyone hale and hearty. You can also earn a total of three stars for each level to spend on upgrades to improve both Tesla and your various robots, and during levels you can open the robot management screen to upgrade any bots you have for the duration of the level with cash. 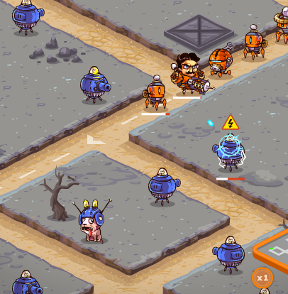 At a paltry fifteen levels, your time with Tesla will be over before you know it, but it's still worth the short investment. The game plays with the levels in various ways, from forcing you to carry fragile boxes in one stage that each take up a robot slot, to rescuing puppies, contacting Martians, and more. So, uh, yeah, not exactly meant as a canon retelling of the great Tesla/Edison rivalry. The downside is that is just sort of feels like the game needs something more, be it extra difficulty options a la GemCraft for each stage, or even just more visual variety, to really push it over the edge and keep you coming back for more. It's a compact little game that feels like it had the potential to be given more room to breathe and been better for it, but will still provide a short burst of surprisingly fast-paced strategic action as it stands. Heck, Tesla was dreamy enough already without adding puppy-rescuing and power armor to the mix anyway.

is anyone else having trouble using the upgrades? I'm on level six and I can't seem to add any upgrades, though I have 15 points. Left-clicking on a desired upgrade does nothing.

Ah, whoops, now I see what I've done. You start from the bottom of the tree up, not from the top down.

If the developer is reading this: could you put the unit names on the cards on the screen where you pick your minions/pack? Right now I don't fully know which unit I'm improving when I spend my stars on upgrades.

Games with Tesla always fun. But this one have some issues. There is no information about units. Game a little bit boring and repititive. On the other side there is nice graphics, easy controls.

If you go to the upgrade page, on the bottom it has a rollover name of the upgrade path. You can only upgrade 3 of the 5 machines.
(Sharp shooter: the small round one, Tunguska Tower: the tall orb launcher, and the Doctor Tower: repair drone. The other 2 are the secret machines and can't be upgraded)

It also tells you the name of the power ups too. (Repair is the hammer and wrench, The Lighting arrow is the Stormbreaker power, and the cracked orb is the Tunguska power)

Fun fact: in the last boss if you buy all doctor towers the game "freezes". Your team still moves, but doesn't attack, the camera can't move, and the enemies can't attack too. If you go to the team screen and then back it will refocus, but only for a second. I also tried a dr, tess, dr, dr, short, dr, but that did nothing, but then I switched it to dr, tess, short, dr, dr, dr and got another freeze, with the short still shooting. Any shots fired would stay frozen in place until I switched the order, then they would all hit. It was fun to surround Ed with a ring of shots and then fire at once.

Same with a level, if you have certain mixtures of doctor bots (all 5 and tess, or 3 and tess, package/bear, and any bot) the game will freeze again and you can just walk to the finish on some levels.

This only seems to happen if the doctor bot path is fully upgraded and still don't know if it will work everytime.