Superbrothers: Sword & Sworcery is, in one sentence, a gorgeous piece of playable, explorable art with a phenomenal soundtrack and overall design that begs to be experienced. We'll call it a point-and-click adventure (a touch and touch again adventure?), but really Sword & Sworcery is all about satisfying your curiosity in a visually striking world and doing one-on-one battles with a few discontented beings. It's a game so stepped in atmosphere and setting you'll feel like it's as epic as The Lord of the Rings, all compactified into your mobile device. 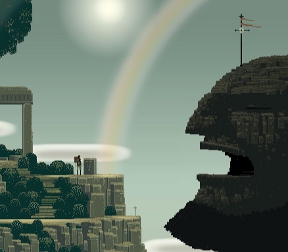 Touch, rotate, and read, those are the actions you'll undertake in this stunning little game, and that's all that's necessary to build a world steeped in unspoken legend and mystery. Apart from its soundtrack and some ambient/non-ambient sounds, Sword & Sworcery is a quiet game that never throws anything in your face. It begins quietly, it continues quietly, and the whole time you're playing you'll pick up on its distilled sense of silence that amplifies the game's setting. To walk, simply double tap where you want to go, or tap and hold to move at a constant step. If you see something you think looks interesting, double tap it to check it out. You can also zoom in and out a level by pinching the screen.

Combat is also a part of Sword & Sworcery, and it's handled in such a way that it adds excitement without breaking the game's delicate silence. At any time, you can rotate your iPad, iPhone, or iPod Touch to enter a zoomed-in behind the shoulder mode. A sword icon will appear, and if you have encountered a foe, a shield icon will also show up. Tap the shield to block, the sword to attack. Watch your opponent's move and counter-attack when there's an opening. Combat isn't too difficult, but it adds a necessary element of danger to the game.

The challenge in Sword & Sworcery comes from solving some simple puzzles that are largely experimental in nature. Battles also become more prominent as the game progresses, but they never take over the heart of the game. As for the story, we'll let those details unfold themselves when you play, as it's not worth spoiling even the slightest bit of info for the sake of a review. 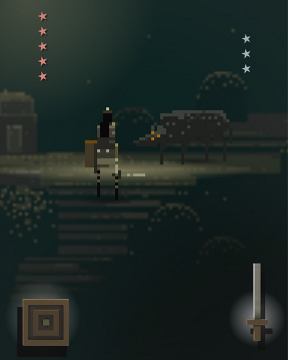 Analysis: Superbrothers: Sword & Sworcery EP is truly a rare game, and when a playable piece of art like this comes along, we'll trip over ourselves to play it as soon (and often) as we possibly can. You can tell from the screenshots that the game's artwork is something special, but once you play it, you realize how well put-together the whole thing is. The soundtrack, Sword & Sworcery LP: The Ballad of the Space Babies by Jim Guthrie, contains over an hour of music, and the minute you hear it in the game you'll want to own the score, too!

If you recognize the art style or the name Superbrothers from before, you're an observant and loyal reader with an eye for good games! Back in 2009, we featured Alpinist, a short adventure-style game released by part of the Superbrothers team. It's been a while since that gorgeous little game was released, but when you play Sword & Sworcery EP you'll forgive them for the long wait.

Yes, we're gushing all over this game like a kid at an ice cream store, but Superbrothers: Sword & Sworcery EP is worth every word of praise we can throw at it. This is a game you'll want to soak in, not skim across, so settle back in a nice and dark room, grab some headphones, and start Sworcerying.

I watched the TouchArcade preview, and... meh. I wish if games were going to do stuff like this, they'd actually avoid the oldest and most untrue stereotypes.

"Look at us, we're doing something new and interesting."

Hm. I spy a wolf. And look, it wants to slaughter us in a very un-wolflike way. No, you're not doing something very interesting at all, I remember this being done in Eye of the Beholder. No subversions at all here, then. So I suspect more show and less backbone, fear of inspiration.﻿

What (besides the price) is the difference between the two different versions of the game? How do I know which one to pick?

"It's been a while since that gorgeous little game was released, but when you play

Looks like you got cut off in the middle of a sentence.

Micro is only for iTouch and iPhone, the other is the same plus the iPad (for those who want to play on multiple mobiles or considering an iPad).

The game is totally gorgeous in it's fluid pixelated animation plus it's wonderful soundtrack music (go grab the digital download), something fans of there animations would be awaiting for.

I bought it and won, and if you want to know my opinion on worth, it's totally worth it, if you worry about length, there's a lot of walking and solving puzzles which are bound to the phase of the moon (this can be shorten with a secret).
Hope this is helpful to your desicions.

If they're both identical, why even offer a non-universal version? I don't get it.

Is it only because the micro version is a smaller file size?

I mentioned before that I was bothered by old stereotypes, and let me explain why - I would've found this more example if they'd shown this from the point of view of the wolf as well.

"The humans came to our lands years ago, and since then they have felled the trees in which our prey called home, and cleared these lands of those whom we hunt.

If I am to provide for my family, their nourishment must come from somewhere... and I'm sure that they will retaliate, but what else can I do? If they were only a little generous with their prey, then perhaps things would work out, but they stockpile it behind tall stone walls, leaving us to die.

Perhaps the time has come for us to turn away from these lands, but these are our ancestral lands, we stood on them long before the humans could walk upright. We ran through them when the humans were still in the trees. And the scents--the memories--of thousands of generations of our people are here.

Perhaps it is better to be forced out, eventually I will decide. If I don't prove worthy enough to hunt these humans... then I'll make the difficult decision to abandon the lands of our ancestors to find plains anew, where these humans themselves fear to walk. For what other choice do we have?"

That would be a hell of a lot better than: "Hey, look. Mindless savage beast! Let's try and slay it!"

I can't think of something as a progressive game if it teaches people old stereotypes and to actually NOT look at things from different perspectives.

@Dreamchaser You are a troll, you gave a highly antisocial comment to Capsized too. By the looks of your comments you never played or even looked into the game, and just wanted the makers and people who play it to feel bad.

For the sake of everything good, what is wrong with you and that wolf! You seem to hate games which are related to killing monsters, but this game is not about killing wolfs (it has three eyes by the way). The game is about getting rid of an evil demon! JiGuest is right you are a troll and seem to have zero knowledge on the game and act as a stupid PETAN!

so, i skimmed over the review, and was super excited and totaly wanted to get it...

so i scrolled down to the downloads and...

[The platform is listed in the header of every review. No need to scroll or to get your hopes up by reading the review before seeing what platform the game runs on. -Jay]

What is that melodramatic hogwash 4 posts above? Was that supposed to be an 'upgrade' of the game script? THAT is the progressive rewrite he thinks the game would benefit from?

Methinks Azrael Nightshade up there needs to get back to turtle-waxing the van!

This is what too much Twilight does to people...

can i play this game on my samsung? I'm totally new to mobile gaming and i'm assuming a "universal" app means its compatible with any brand... but you never know..
thanks!

So... there's no version for android devices? Or is this an iTunes specific app? Because I know that apple iTunes and android market do not carry the same programs. You can get apps that work the same on both platforms, but apple producers do not make apps for android.

Dream Catcher -has- to be a furry with that drivel he posted.

So glad this game finally came to Android! Bought it as soon as I heard of it.