Little Guy Games' adorably addictive action-packed free iOS arcade game Super Snack Time might be the cutest, juiciest, bounciest mobile game around. Just because your world is under attack is no reason to panic... especially not when your enemies are delicious as this! Though it has to count as a war crime to eat your opponents, you're setting out to do just that as a brave little hero who can launch himself into the sky with a slingshot to burst the baddies and rain nuuuuutrients down to the hungry little dudes below. Sound horrific? Not hardly! I mean... not unless you think about it. Not unless you lie awake at night, thinking of all the things you've done, the lives you've ended and seen drunk greedily up by your ownWOO, EXPLOSIONS, COLOURS, YAY! 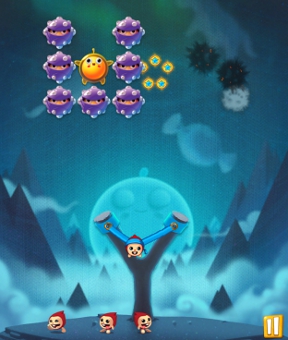 The gist is enemies will come in from either side of the screen, and your job is to launch your hero at them by dragging and releasing on the screenshot to hit them before they reach the other side. If a baddie escapes, you'll lose a heart, and losing all three means you'll have to restart the level or fork over a Revive if you have any kicking around. Although things start off easy, you'll soon have to contend with a wider variety of enemies, from explosive ones, to armored foes that can only be removed if you take out whoever they're protecting, and much more. Super Snack Time has several types of levels, from a standard arcade-style mode, to a more puzzle-oriented type where you'll need to get rid of enemies in a certain number of shots, and finally flat-out survival where you have to last 'til the time runs out.

Super Snack Time is one of those mobile games you sort of just wish you could plunk down a flat fee for instead of having to contend with the microtransactions. You're far from forced to spend money, but considering the coin-price of upgrades and how you have to keep recharging bonuses, you'll probably be tempted to. There's two different types of currency, coins and energy, and while the latter is easy enough to come by either through simple play or watching 14 second video ads until your eyes bleed (surprisingly tolerable!), forcing you to fork over energy to keep playing is sort of annoying even if it does automatically regenerate over time. Because you will want to keep playing. Super Snack Time is the sort of relentlessly cheery, grin-inducing arcade action you wish you found a lot more of, and it's easy on the eyes to boot. The almost puzzle-like approach you'll need to take to win even the arcade levels keeps you thinking even as you're moving, and the challenge ramps up nicely. Packed with explosions, colour, and more gooey baddies than you can launch a hedgehog at, Super Snack Time is perfectly cute, perfectly fun, and... kind of makes me hungry. Should I tell my therapist about that?

NOTE: This game was played and reviewed on an iPad (First Generation). Game was available in the North American market at the time of publication, but may not be available in other territories. Please see individual app market pages for purchasing info.