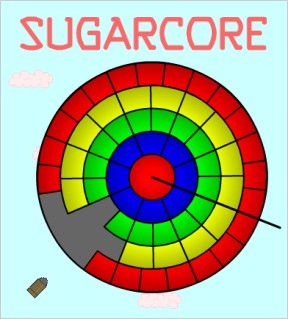 Have you ever thought about being a candyman? Of course you have. Maybe you dreamt of striking it rich in a high-tech candy lab, combining high-fructose corn syrup with various unnaturally hued dyes. Or maybe you're a bit of a romantic, and you fancy taking a rainbow, wrapping it in a sigh, and then soaking it in the sun to make a groovy lemon pie? And you could, certainly — but there's another way, a better way, and Gregory Weir's new game Sugarcore is here to open your eyes.

The premise is simple enough. See, there's delicious candy out there for those brave enough to mine it. Using only your mouse, you must spin a giant orb made of coloured candy blocks. Incoming bullets will fire automatically, and your job is to get them to strike the blocks of your choice, which destroys them and adds their value to your score. Some colours are worth more than others, and you'll have to dig deep and execute some fancy moves to get at them.

Of course, you'll also have to watch out for chocolate, which will liquefy if you hit it and fill up all the empty blocks you've destroyed, undermining your hard work. And then there are the candy's natural defenses… but I'm sure you won't have any trouble with that. You're a pro!

Although Sugarcore starts out slowly, the pace quickly escalates as you advance through the levels. Three different characters will assign you missions, each with a different style of play. In addition to mining out valuable candy ore, you will need to use your incredible rotation skills to keep the candy core safe from invaders… or, you know, destroy it.

Your reflexes will have to be quick whatever your assignment, so it's a good thing the mouse control is so responsive and easy to pick up. The downside is that the game only recognises your movements if the cursor remains inside the game's borders; venture outside them, and the candy will either stop moving or jitter around in the wrong direction, which can potentially foul up your objective. While there are a lot of levels, almost none of them are over 60 seconds long, which often means making every move and bullet count. 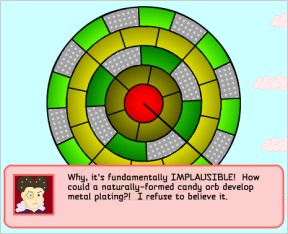 Analysis: It may look and feel like a puzzle game at first glance, but it's not exactly relaxing. Sure, there's cotton-candy music that reminds me of being five years old and watching clouds drift by overhead. There are adorable character designs and bright colours that look like they came straight out of my old Lego sets. But after a few levels I was leaning forward in my chair, staring at the screen with an intensity usually reserved for open-heart surgery performed by a surgeon with an involuntary twitch. With how swiftly things move along, you're better off just reacting than trying to think out your every move.

Some of the levels are incredibly fiddly, requiring you to move your mouse just so at just the right moment, and even one improperly placed bullet can be the difference between winning and losing. Still, with such bite-sized levels, you're never set back very far. I didn't ever stop having fun, even if I never expected to have quite such a grim attitude towards chocolate. The different objectives for the three sets of levels each present their own unique challenges, and it's good to be able to swap to a different level when another starts to get frustrating.

Don't let Sugarcore's ultra-simple presentation deceive you. There's a surprising amount of charm and cheek here — although perhaps not that surprising if you've played any of Gregory Weir's previous games. There may not be a lot of replayability or depth, but there is a solid amount of fast-paced puzzle blasting, and treating yourself to this candy won't make you feel guilty.

Would be nice if it was bigger (Last level was VERY challenging though, took me a few tries)

You see, now THIS is exactly why I love Jay Is Games. Home made games that are lovely and fun and make you feel warm and fuzzy. Not to get some information about Big Fish Games having a sale on some lifeless hidden object title. Takes me back to the game comps. You gonna have another one of them, guys?

Agreed s.co, so fed up of all the big fish adverts.
This is a nice little game, graphics could do with a bit of a polish but the core idea is sound. Personally, I would prefer if you could spin the disk using the arrow keys, though.

Man, the only frustrating thing about this game is if you make a mistake and want to start the level over, you can't do anything until the level ends. That could mean hitting a chocolate early in the level and then needing to wait sixty seconds before you can retry. Blargh.

I really liked this one. The last demolition level had me laughing out loud. =)

The only thing I can find wrong with this is that, in levels without armor, it's possible to shave off the top ring of candy just by rapidly spinning the orb in a circle. This made the defense levels somewhat easy.

I don't personally think that the game would benefit from more polished graphics. In games involving wide movements with twitch reflexes, I think it's better to be able to see clearer. The solid colors do just that.

Lovely little game. Certainly a unique concept. I'm surprised by the difficulty of some of the levels, as well.

Oddly enough, I recognize the title/menu music from another game: "Ultimate Bullseye II" on Neopets :P

Great game, perfect length. Just when I thought it would get boring there would be a very different level.

Anyone else having trouble with the level "Lemon Drop"? It's the 8th level for the candy mining. Is there any way to tell which piece of candy is the golden candy, or is it complete random? I just can't seem to find it.

Turn the orb about 20 degrees counter-clockwise from due south. The gold candy is close to the core.

Great little game. I really felt it ended too soon, especially since it's really rather easy (the only level I repeated more then once was the last one).

But overall, gems like this are the reason I visit this site.

Huh. Apparently I managed to pull off #3 on the high scores list with my first try. Awesome game.

The only level I thought was a real challenge was the smiley face level, where you had to hit the liquorice blocks under the layer of armor. Everything else was pretty simple, but there's lots of potential for harder levels.

Gregory Weir isn't just one of the best new talents in Flash game design, he's also one of the most versatile developers I've encountered. All of his games are awesome, and no two are anything alike, either in terms of story or gameplay or even graphics.

He said he was going to make one game for every month of this year, and I'm definitely looking forward to it...

Oh, and this is a great game, much more lighthearted than his first two and a little lighter than his third, with a cute and fluffy little story, soothing appearance and creative gameplay.

1. Agree with those above who said it could use a reset button, instead of needing to let the timer run out every time you make a mistake. That's pretty much my only complaint.

Well, with so many good games from Weir, there gotta be some bad apples, too. The bad controls nearly made me quit, only sheer will to complete the game made me continue. The characters were rather funny, though.

Controls need to be tighter, especially with people using optical mice, on a laptop, on a bed without a good surface area.

I had to comment because that's exactly what I am doing now! I'll try again another day when I have a mouse.

Really enjoyed the game, but for further improvement, I suggest keyboard controls.