We live in a world of invisible walls. Race, class, gender, religion. Sometimes it's important to remember that human beings can accomplish wonderful things when we find the fortitude to work together. Maybe that's what the new Unity-powered puzzle game Suddenly, Thousands, by Omiya Games, is trying to teach us. We might be pirates and samurai and wolf suit-wearing misfits, but with a little time and effort, there's no obstacle we can't overcome. In this extremely experimental platform game, you guide your little avatar with the [arrow] or [WASD] keys and use the [spacebar] to jump through some exquisitely rendered 3D environments, using the mouse to pick up stragglers and build a little crowd. It's sort of like Pikmin, or a 3D Oodlegobs, having you wrangle your expanding horde of followers past traps and over barriers. There's also a robust physics system. Everything's just so darn cool with this game. 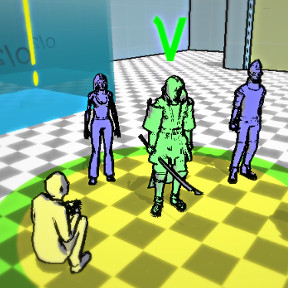 The art style is a major sell here. The development team brings the full power of the Unity system to bear, creating remarkable monotone character models with fantastic animations and very little lag. Watching your squadron of player characters plow through physics-obeying boxes is a joy to behold. You can also switch between the characters you've picked up with [E] or [Q], a useful ability since some of the characters have subtly different abilities such as shorter stature or a higher jump. But really, Suddenly, Thousands is a better experiment than a game, a really fascinating tech demo for some cool new gameplay concepts that very few developers have explored. That's not to say the puzzles aren't deviously engaging, they absolutely are. But Suddenly, Thousands is best thought of as a promise of things to come. We're certainly looking forward to it. Check out Suddenly, Thousands and learn the magic of togetherness, one puzzle at a time.

The link to Oodlegobs is broken; missing "/archives" in the url.

Beautiful little game here. I enjoyed the concept very much. Aside from some tricky camera angle maneuvering at certain points, the game play mechanics were quite smooth. The music was ethereal. I very much enjoyed the experience.

I do recommend the implementation of a difficulty-reward system per level, such as the three star system commonly used with puzzle games. I challenged myself to beat the "par" goal for each level by keeping all beings alive, having all beings active, or taking them all to the finish. However, officially having a system that rewards players for beating the goal would make it a more rewarding experience, therefore giving the game a higher replay value. Players love additional challenges or achievements. Well, I do anyway.

I just get this message: "No plugin available to play this content"

You need the unity plug in