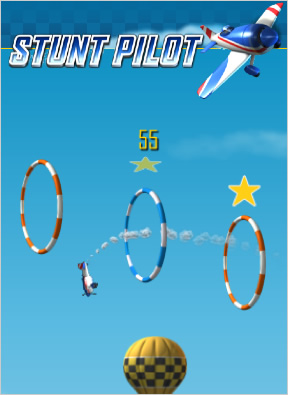 Stunt Pilot, from talented developer Rock Solid Arcade, is a challenging, high-quality game of precision acrobatics. It transcends the familiar trope of flying through rings with a sophisticated scoring system and singular control. The result is a simple but engaging test of skill that would fit comfortably in any 80s video arcade, although it would probably be the prettiest game there.

Your goal is to fly a colorful prop plane through a series of rings, which will appear in increasingly more difficult layouts as you advance levels. You can tackle the rings in any order, and take as long as you like about it, but finishing a level quickly will award you a substantial score bonus.

Controlling the plane is deceptively simple — just press [up] or [down] to raise or lower your nose. But two things will keep you from breezing through the rings without care. The first is that your plane has momentum. It feels almost as though you are sliding on ice at first, and you'll have to deal with a lot of over-corrections before you get the hang of it.

The other is that your plane never turns around. When you're flying to the left, the plane is upside down, and the up key will actually drop your vehicle towards the ground. You have to correct for this by performing a little mental stunt yourself and remembering that your controls are always relative to your current trajectory. The real challenge is learning to handle the plane properly, not the rings, and your transition from awkward tree-bait to elegant master of the skies will be your greatest reward.

If that's not enough for you and you'd prefer to rack up some points, then you'll need to use the boost, which is controlled by the [space] bar. Pressing boost will make your plane faster and even harder to wrangle, but the score for the next ring you conquer will double. If you hold down boost through multiple rings, your score multiplier will increase for each one, and you'll get a bonus at the end of the level, based on your longest combo. Even if you don't use the boost, your points for clearing rings will gradually increase so long as you don't crash, but the only way to reach a high score is to get a little bit reckless.

Analysis: Stunt Pilot is a class act through and through, with gorgeous, nearly photo-realistic rendered graphics and enthusiastic background music. Rock Solid Arcade earns their name by providing rock solid controls and collision detection, although both have the potential to make you pull your hair out at first. You see, the edges of the rings, which are apparently made out of anti-gravity titanium, crash your plane on contact. If you can't pull off a clean run through a chain of rings, you're probably toast, and that means your basic score multiplier goes back down to zero.

But as with any difficult but reliable game, the emotional reward is greater when you succeed. You'll feel like an ace whenever you speed through a level with a perfect combo, purple smoke trailing proudly behind you. Even the prop plane seems be having a good time, what with its endearing spontaneous barrel rolls, and if you ever start getting frustrated, it's fun to just do a few figure-eights in an unoccupied part of the open sky.

The incentive program is a little lacking, with naked points and personal satisfaction your only rewards. It would be nice to get a shiny medal after a perfect level. And there doesn't seem to be a high score table at all, so if you thrive on competition, you'll have to compare scores manually. I also would have liked a little more interactivity when the plane crashes into things — rings falling to the ground, punctured hot air balloons, that sort of thing.

But Rock Solid Arcade has already addressed most of my criticisms with their next two releases. The rings can't kill you in the toned-down Stunt Pilot Trainer, and Dogfight: the Great War applies the same control scheme to a series of WWI combat missions, complete with a giant zeppelin boss. Both are worth your time, if you dig this style of gameplay.

This game is really very easy to me. I guess it comes from practice from other games with a similar control scheme and flight simulators.

That's great. Another fine example of how simplicity in gameplay can yield a highly engaging game. I really enjoyed this.

Although I hope the lives thing doesn't become annoying, I like the way tea games lets you play any level.

Very cool little game. One of the things I liked best about it was its elegant simplicity of control. I lose interest quickly when a games controls require the manual dexterity of a concert pianist.

Psychotronic's review was spot on, and almost as entertaining as the game... and undeniably more articulate :-) Great job!

Did anyone else have more fun crashing this thing?

Interesting. I don't see a credit in the game for Turbo Grid by Bjørn Lynne, the music used in both Stunt Pilot Trainer and Stunt Pilot.

The game itself is fun.

I liked it a lot when I crashed and retried the level I saw the earlier myself still descending with the parachute - like a time travel :)))

A side note: when the game is over I'm offered 3 other free games to play, I just have to click on one of the three picture-links but none of them seems to be working. Is it only me?

Anyone remember "Sopwith" (MsDos game back in the late 80's). Exactly the same controls (but you got to bomb enemies and dogfight)

needs a fullscreen version. when i use the arrow keys it shifts the entire browser window. very annoying.

other than that its very fun

They could do with a full level select (even if only once you've completed it) and gold/silver/bronze medal system to give people something to work towards - would've made the game a lot more addictive.

This is a really great game. It nicely walks the line between simplicity and satisfaction. I would quite have liked the possibility of showing a replay of yourself completing a level, since the game allows you to pull off some pretty great moves that would be pretty satisfying to watch again.

The arrow keys shift page along with plane's pitch.
It makes it impossible (for me) to play.

If the game has focus (click on the game to give it focus) then the arrow keys should NOT be intercepted by your browser.

What browser are you using?

Perhaps your Scroll Lock key is on?

I'm having the same scrolling issue. The games does have focus, and plays quite well - except the screen scrolls up & down with the arrow keys.

Sadly, the game screen is so large that even full-screen mode still scrolls some. Fun game though!

I am also having the same issue with the arrow keys scrolling my screen. It is not scroll lock. running xp with IE7 - any other thoughts?

use a real browser?

What are your best results in this game? I nearly reached 60000 points.

what's the difference between blue and red rings?

Blue rings make you do a barrel roll. It looks cool.

That's a selection screen to choose, not an instructions screen for what to do. :)