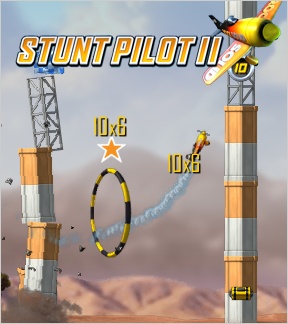 Stunt Pilot 2 is the long-awaited sequel to Rock Solid Arcade's original precision aerobatic flying game. While the basics of the original are carried over, Stunt Pilot 2 adds a number of features that make it well worth a look.

Each level sees you flying your plane through a number of rings in order to complete the course. In a change from the original game, you now have to "unlock" an exit ring by first flying through all of the normal rings in order. You will have to avoid a number of obstacles along the way. Giant rock formations, hot-air balloons and zeppelins, racing pylons, and trees are just a few of the things that could bring an early end to your stunt flying career.

You should also be on the lookout for point coins scattered throughout the level. The most common is the 10-point coin, but cannons located in many levels will shoot 50-point coins that you can catch in midair. There are also bonus tokens to be had. You can earn an extra life by collecting four tokens that spell out "LIFE", or give yourself more time to complete the current level with the fuel token.

The control scheme couldn't be much simpler. Use the [up] and [down] keys to control the ascent and descent of your plane. Or, if you choose, you can also use the [left] and [right] keys. The Option menu allows you to reverse the controls, making the up key control descent instead of ascent and vice versa for the down key. If you're used to playing other flying games, that setup might seem more natural (I know it does for me). The [space] bar controls your boost. Be careful though, because using the boost depletes your already limited supply of fuel for the level much quicker. Most early levels don't require the use of the boost, but later levels will, so use the early game to get used to flying with added speed. 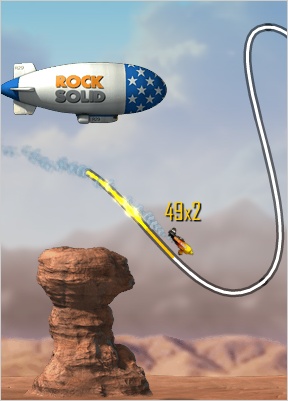 One readily apparent addition to the game is the explosions. No, not just your fiery death every time you collide with an obstacle. In most of the levels, you will find a number of small, yellow explosive devices attached to the obstacles. As you fly through the trigger ring for the device, it will go off and the obstacle will explode. This creates another hazard, as you might now have to contend with a toppling racing pylon, or a deflating hot-air balloon.

Intermixed with the normal levels are a number of bonus levels, where you have to keep your plane as close as possible to a curvy line in the air. The closer you are, the faster your score for the level will increase. If you can stay directly on the line, it will catch on fire, and you will earn a bonus at the end of the level. The paths become truly devious and challenging in later levels.

Probably the biggest addition to this sequel is the level editor, which will let you create your own courses for the game. You have access to all of the rings, obstacles, and bonus tokens, as well as background objects like the little people that run around and observe your aerobatic stunts. You can save your levels and come back to them (once you create an account at Rock Solid Arcade's website), and you also get a URL that will allow you to share your levels with other players.

Analysis: As much fun as I had playing the original Stunt Pilot game, I have had that much more fun playing its sequel. This game is an extremely well put together package. The controls are tight, the graphics are crisp and detailed, and the level design ramps the difficulty at a nice pace, allowing you some success before really making you work for it.

I really like the addition of the explosive devices. It makes the courses much more exciting, in a Hollywood sort of way. It also creates an added challenge in many of the courses, as you are often required to trigger certain explosions in order to progress through the level. The falling debris keeps you on your toes as you attempt to avoid it.

This added explosive content also extends to your plane itself, as there are a number of different ways to wreck your plane this time around. Fly straight down, and it will embed itself halfway into the ground. Skip it over an obstacle, and watch the fuselage bounce along the ground. Clip a wing on a ring, and watch your plane go spinning to its ultimate demise. Generally, your pilot parachutes to safety, but occasionally there isn't time. At times I found myself trying to crash my plane in different ways just to see what would happen.

On the downside, there are a few things that I need to take issue with. The first is more of a warning. Make sure that you have a fast enough processor for this game. I would suggest something over 2 GHz, but your mileage may vary. I originally played this game on a computer with a slower processor, and it felt like I was trying to fly an elephant. It made precision flying in the later levels nearly impossible. I was ready to mark the game down for poor control, but then I played it on my computer at home, and found that it ran much smoother and controlled much better. Just something to be aware of.

The original game allowed you to continue from the last level that you completed. This was very handy, and something that has almost become a staple of multi-level casual games, but this feature has been inexplicably removed from the sequel. This can get frustrating, as you are constantly forced to play through levels that you have completed over and over again to progress in the game. This is a decision that I hope the developers might reconsider in a future update.

Stunt Pilot 2 is truly a joy to play. I keep coming back to it over and over again as I slowly hone my mad flying skillz in order to make it one level further this time. If you enjoy this type of flying game, make sure to check out the original Stunt Pilot, as well as another of Rock Solid Arcade's flying games, Dogfight 2: The Great War. They are all sure to put your flying skills to the test.

This game is so great. The levels where you have to spin around dodging falling debris or turbo under a row of collapsing zeppelins feel like you're in the middle of a stunt sequence in a movie. Love the "Destruction Bonus".

I loved Stunt Pilot 1, but this is crashing every browser I try to play it in. I've got a dual-core processor and 2gig of ram, which I would have thought sufficient for a Flash game. Dagnammit.

The so-called Bonus Levels annoy me.

If you die in a Bonus Level, you lose a life! So why is called a Bonus Level? It's just a regular level in disguise...

I'm not good enough at this game to get past about 10 levels, and don't enjoy having to replay them from the start every time. Gameplay was okay otherwise.

For those who are curious about the number of levels...

There are 20 total levels. After 20, you restart at level 1 with what appears (at least to me) to be a faster plance.

Overall, I enjoyed the game. I played way too much Dogfight 2, so controlling the plane was easy. Nevertheless, it took me a few tries to get through all the levels.

Ok, I posted that too soon... after playing it I think the controls responded better in the first one. These are way too sensitive...

It would be amazing if there were an infinite life cheat for this game. It is so much fun just flying around and crashing into stuff for the great destruction visual effects.

Yeah, it would be so much more fun if it were like Plants Vs. Zombies, where you don't have to start over after every 5 lives. Seriously, isn't it arrogant for game programmers to assume that we will keep playing the same levels over and over just to get back to our original progression stage? That's just obnoxious and way to donkey-kong. The casual gamers of today require much more reward. We will simply go to another very good casual game and be none the worse off. Programmers, get a clue: you aren't a rarity anymore: don't act like you are the only ones who know how to write a game.

What a bizarre comment, JIGuest. Rock Solid Arcade aren't arrogant; they're just offering you the feeling of accomplishment that you can only get by playing a game as a whole. People weren't idiots for enjoying Donkey Kong. They liked the challenge of seeing how far they could get. And that was when all gamers were casual gamers.

However, I do think that Rock Solid Arcade could have catered to more than one type of gamer by including two styles of play. The one that forces you to make a straight shot through the game like it is now, and a training/career mode, where you unlock levels one at a time.

I have nothing against the old-school restart-from-beginning mechanism. I like when the game forces you to actually make effort to see the whole thing, instead of today's games which can mostly be finished by an average 3-year old.

However I didn't find this game to be that enjoyable. It's very easy to crash and the interval between crashing and respawning is just a little bit too long for my taste. I guess I can see why someone would dig this game, but it just isn't for me.

I don't understand your kind. There are many types of gamers out there and they enjoy various things.. why are YOU being so arrogant to impose your own personal preferences on everyone else!?

I don't see why everyone is jumping down JIGuest's throat. All he is asking for is a continue. What's so wrong with that?

I happen to agree that there needs to be a continue and all Rock Solid Arcade games have had the problem of NOT including one.

Well we, casual gamers, think it has something to do with the way he asks for that continue and how he consistently hides behind the collective noun. We just don't appreciate it.