If you've played TeamSemiColon's String Theory and been entranced by the gameplay, you'll be pleased to hear of a second installment in the series. With parts a little bit charm and others a little bit strange, String Theory 2 picks up on where the narrative left off, with the scientists traversing the strange dimensional area. Playing as Eva, you have to delve in to try and liberate your friends to bring them back into your world, the Upper Plane.

Despite not seeing or previously knowing the characters (aside from, of course, the prequel to this title), it is not difficult to develop an affinity for their two-dimensional counterparts. Each shape is linked to a character through pretty solid voice acting. An addition to this installment is several cutscenes and explanation of a bit more of the story as well. 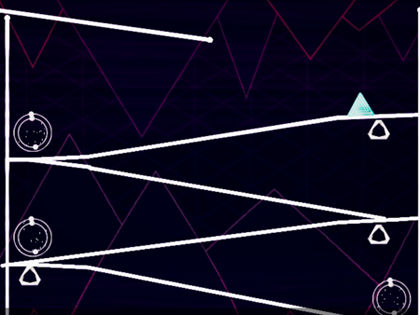 Similar to the first game, the premise is manipulating different sorts of strings and progressing from one level to the next. All your favorites have returned - bendy strings, strings that snap (oops!), immovable strings, and rigid (rotating) strings. The objective is to get the shapes into the appropriate wormholes in each level. The difficulty for this game seems to have been scaled back a bit, but there are several places where it is not quite clear how to proceed, rather than difficulty in the execution.

The game is controlled entirely with the mouse and clicking and dragging. Much of it can be done on a touchpad (for example from a laptop), but a regular mouse may be preferable at times. Most of the game is fairly intuitive and can be worked out using simple logic, but some of the later levels require more in the way of planning or trial-and-error to neatly pick out the solution. It's a solid improvement on the first game, and seem to leave open the door for a possible third. So come and explore, and maybe unravel this mystery a little more!

Takes a long time to load. I couldn't figure out how to play. I didn't play the first one, and didn't see any instructions.

The second image links to the first game.

You've got to drag the "strings" in the game (and various other contraptions) in order to manipulate the level and get the shape(s) to the exit. It might be a good idea to check out the first game as well if you'd like to give it another shot.

Also fixed the image link issue, thanks for pointing it out Cyberjar.