In Deqaf Studio's Strike Force Kitty and its sequel, the fox kingdom has been trying really really hard to overthrow the kitten kingdom, but all they've gotten is a sound beating for their trouble. Cats rule and dogs drool, after all. But in Strikeforce Kitty: Last Stand, which puts a defense-centric twist on things, the raccoons have been hired by the foxes, and things are getting serious... or at least as serious as a game about cuddly animals waging war while dressed as popular characters from anime, video games, and more can be. To play, click the attack button rapidly to have your cats hurl themselves at the enemy. Your cats' health is displayed above their heads, and if it runs out, they'll be escorted off the field by the paramedics and unable to fight for a while. Beat down a racoon, however, and you'll have a chance to earn whatever costume they were wearing, which you can in turn equip your kittens with, and often grants unique abilities and bonuses, such as a chance to block enemy attacks or heal your whole army. You'll need to defeat all waves of enemies in order to win, and on your side you also have special cats who will use their unique skills to help you when their timer bars are full. Use the fish dropped by enemies to upgrade them, or to enhance your castle! 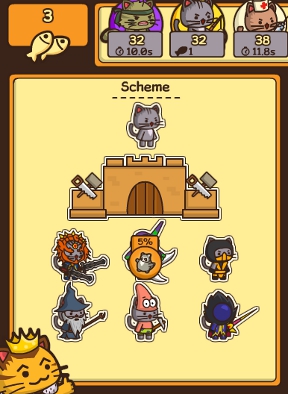 Like the first two Strikeforce Kitty games, Last Stand is a bit of a grind when it comes to earning costumes and fish for upgrades, but its focus on button mashing and defense is a pretty abrupt change for the series. It's still cute as a button, with all the various costumes you can find an absolute treat, but it does feel like a lot of the game has been stripped down to the point where it's almost too simple. You're parked in front of your castle mashing the attack button, occasionally popping into your inventory to compare new costume statistics or spend your fish, and it lacks the fast-paced, breezy exploration of the last two games. Cute? You'd better believe it, down to the meowed "wee-oo-wee-oo" ambulance sounds when your paramedic kittens come out, and while some people have reported lag, I found the game ran fast and smooth, so all that Squirtle-on-Patrick-Star-on-Ganondorf mayhem was front and center. For some, the drastic gameplay change might be a bit much, but if you just want to see raccoons and kittens dressed as characters from Lord of the Rings, Teenage Mutant Ninja Turtles, Mortal Kombat, Death Note, and many, many more, well, this kitty's for you.

Too bad it has the same memory/performance degradation as all of the other Strikeforce Kitty games. I really like the series, just not the performance

Well. I played for 5 minutes and that's enough for me.

I felt like I was just sitting here clicking a button and not sure what I was watching.

I'm a completionist, so I played through and got 100%. I would not recommend anyone else waste time doing this (or even completing the game) unless you really want to see all the costumes.

After a certain point, I got out my autoclicker. There's no gameplay and only a tiny amount of strategy. I'd definitely not recommend this game, despite the variety of cute pop-culture references.

Early game the fishing upgrade is useful. There's no upper limit to upgrades, so stop investing in it when it gives diminishing returns. The front line has a shorter distance to travel and can attack more often, so it's better to put your most useful abilities there. Keep in mind the back line gets priority for revival, so you may need to switch around your abilities when most of the group is KO'd.

Late game, I found the vampire upgrade to be most effective, since a good vampire could last a while even with everyone else KO'd. My entire front line was vampires for a large part of the game. On bosses however, I think all effect-on-impact abilities are useless. The revive-with-half-health, chance-of-blocking-damage, and ranged double-shot abilities are the only ones I saw having any effect.

Against the last boss you'll need to be able to revive quickly and have enough health to stagger health bars, since you won't be able to defeat the boss before most of your group is KO'd.

Anyone have a list of all the costumes? I seem to be missing some. I have only 2 platoons left before it's all bosses and I have more than that many open costume slots.

ah, nevermind. I figured it out. Just missing 2.

977 Views
0 Comments
chrpa— Jayisgames needs your help to continue providing quality content. Click for details Welcome to Mobile Monday! Bart Bonte's games are always fun - this time we've got a physics game which mechanism is simple and many players may remeber...  ...

3,397 Views
0 Comments
chrpa— Jayisgames needs your help to continue providing quality content. Click for details Welcome to the Roundup 33 with three games! As mentioned in the previous roundups, only odd-numbered episodes are featured since even-numbered are for Robin Vencel's patrons. More...  ...