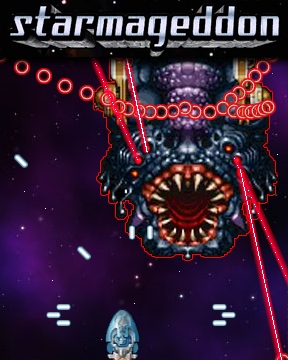 Once again an alien force with a knack for immense design diversification and absolute abandon when it comes to firepower barrages has decided to invade, so it is up to one man and one ship to stop the whole armada in its tracks. Yes, it's SHMUP time in Starmageddon!

There are two control sets to choose from, mouse or keyboard. The mouse allows for somewhat smoother controls, and its auto-fire may make it a good choice for newcomers. (Or those of you lacking the QWERTY keyboard.) You'll fly through vertically scrolling space taking down enemies who try to swarm the screen with firepower, and collecting the coins and diamonds they drop to spend on upgrades between levels. You can also use your Shockwave ability to help block enemy fire, among other things, which can give you a bit of breathing room as things get tougher.

The shockwave is pretty much the 'bomb' element. Every SHMUP (SHoot eM UP) provides one 'get out of jail' weapon that you can use to even the odds. The most common is a 'clear all' bomb, but Starmageddon opts for a rechargeable shockwave. This blasts at a radius around the ship, damaging enemies and absorbing bullets. It creates a tiny and brief pool of solace in the middle of a firefight (and becomes indispensable during the later boss fights). The Shockwave has its own upgrades to increase its damage, spread, recharge period and duration.

On the one hand you have to question the absurdity of sending one pilot to take out a massive hostile force. Sure, many games in the genre have attempted some vague plots here: "A lone pilot has a better chance to infiltrate the enemy forces", "It's a new prototype spacecraft and we only have one" or the always reliable "They killed my DOG and they must DIE". But on the other, these enemy armadas always end up hammered to oblivion by such a lone craft, partly thanks to its ever-expanding repertoire of super-weapons. One could also ponder why not just give all the weapons to the pilot from the start, but it is becoming clear that as the trigger man it is not your job to ask questions.

So, for whatever reason and whichever tactical handbook involved, you are heading into space to shoot down a colourful variety of enemy spaceships, always culminating to fighting a huge boss ship at the end (Come to think of it, why does the boss always fight alone.. you know what? I don't care). 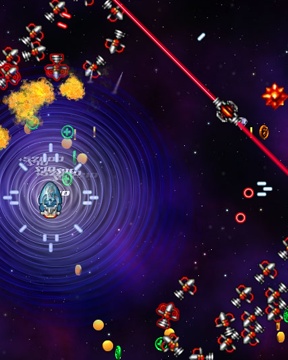 Analysis: SHMUPs come in all shapes and sizes and many different gameplay designs have been introduced over the years. It can get as simple as the super bombers of 1942 or the colour-switching madness of Ikaruga. But at their core these games all share certain attributes to define their pedigree. First, and obvious, is the increase in weaponry. In Starmageddon you collect coins and multipliers, all in aid of buying upgrades for your weapons. Eventually you can shoot in all directions - and each weapon has three upgrade levels to unlock. You can also purchase shield upgrades and improve the ability of your shockwave.

Finally we come to the most important element: pattern recognition. A fanatic of the genre once told me that these top-down shooters are not action games, but puzzles instead. The trick is to recognize the patterns and move accordingly. Starmageddon definitely shows this off in its boss fights, though during the intermediate battles things can get a bit too hairy to really see what is going on (this is where the Shockwave helps a lot). But in holding to the pattern tradition, you do not actually shoot in the game. Instead the ship fights on its own volition, leaving the flying to you. In a way Starmageddon is ALL about pattern recognition (or, at the least, dodging those damn bullets).

A nice touch is that you can replay earlier levels, taking advantage of new upgrade to earn some extra cash and upgrade your abilities early on. Going straight from level to level is not advisable: you won't unlock all the upgrades in time and by the last two levels you will need everything your armory can offer to have a fighting chance. Starmageddon is aimed more at novice SHMUP enthusiasts: it is not terribly difficult, though it has its moments. The largest moments of panic and frustration, though, come when you lose control of the ship because your mouse has moved off-screen (you can, alternatively, use the keyboard). This niggle and its lack of complexity/challenge aside, it's a fun game to spend an hour or so on. So go on, avenge your dog.

Great review, (I especially liked 'they killed my DOG and they must DIE') but I have two minor pedantic corrections:

Every SHMUP (SHoot eM UP) provides one 'get out of jail' weapon that you can use to even the odds.

Well, not every one! 'Smart bomb' weapons are common, but certainly not universal.

...the colour-switching madness of Ikaruga. But at their core these games all share certain attributes to define their pedigree. First, and obvious, is the increase in weaponry.

Ikaruga is an odd choice for an example here, since it is one of the few shmups that does not feature any weapon upgrades.

These are very small nitpicks though!

My favorite type of games; Upgradable SHUMP games. Pretty enjoyable, kept me entertained for a good hour. The rate at which you gain upgrades is very well played out, as you can easily gain upgrades quickly and there's no "playing five rounds to get one upgrade" type of play. After every round I could buy at least one upgrade. Overall, I would say that you could play the first six levels once off, then twice for each level after that to upgrade all the way by the 13th and final level.

The degree of difficulty isn't bad at all. In fact, I went until the 7th level before realizing I had Shockwave. While you don't really need it in lower levels, the upper levels will blast you away without upgrading it.

I seem to be having a problem loading the game... It just stops once it reaches about 95% of the way in.

[Try emptying your browser cache and reload the game page again. Sometimes a Flash file will get corrupted or cached incompletely while downloading and the only way to get your browser to realize the game hasn't downloaded completely is to remove it from the browser cache. -Jay]

I died due to dumbness on level 5, and after repeating that level I later replayed level 1 exactly once because I needed 500 bucks for the final speed upgrade, other than that I played through the levels once in order. Ended up fully upgraded after level 12.

Coin magnet, speed upgrades are the most important. I ignored the shockwave until the last couple of levels.

Great point about pattern recognition in the review!

Kinda easy, but very very fun nonetheless. I ended up having everything fully upgraded by the end of level 10, but this game was great.

A word to the wise - Upgrading fire rate multiplies firepower of all guns, so combining damage upgrades, multiple weapons, and increased fire rate evenly instead of all at once increases efficiency.

(Lol, the captcha for this includes KKK)

Andrew echoed my sentiments exactly: I thought the difficulty was too low and the game a bit short, but that didn't stop me enjoying the heck out of obliterating aliens :)

I feel like it should be pointed out that the vast majority of the graphics in this game are repurposed sprites from the classic DOS game "Tyrian".

Very fun game. Especially with the pictures of enemies and bosses taken from the old Tyrian! That was my favorite SHMUP and I still go through it once in a while, although graphics are a bit outdated.
This one is a little to easy and short (compared to Tyrian that is).

I was a bit sad that there are no other intersections with Tyrian rather then pictures. Still this game is fun!

This was another schmup I can enjoy!

The ability to go back an replay levels allowed a mediocre player such as myself to level up early on (as well as practice), and I was able to beat the game without too much trouble.

This was a fun diversion.

My only complaint is that the red point multiplier looks like the O-shaped enemy bullet. Once I got the magnet upgrade, I suddenly thought the enemies' O shots were following me!

Fun game... pretty easy though. I repeated 2nd level once for hell of it.

Otherwise you can walk right through every level and get all the upgrades by end. Once you can recharge shockwave quickly the game becomes WAY too easy. Fun 20 minute distraction.

Amazing... 187 MILLION points...?! Never had that endscore in a game :)
Anyway, enjoyed the game, played up to level 8, repeated the first levels to buy all the upgrades, after that it was easy.

Easy, yet fun. My only complaint would be that the keyboard movement wasn't very smooth, which made dodging difficult at times, but then again dodging doesn't really matter once you fully upgrade the shockwave.

Easy, yet still strangely fun. I never repeated a level - I got all the money I needed just from playing each level once. I was still buying upgrades all the way to the third to last level, and never died at any boss more than once... right up until the last one. I've died about 5 times now, and I have all the upgrades, but I still can't beat it. More pattern recognition necessary, I suppose. Still, it's been really fun up to this point :D

Seems it differs from player to player: I didn't make enough cash to get all the upgrades in one go.

Defeating the final boss is not hard. The trick is the timely use of the shockwave. Keep around his front areas and when he uses his lasers to cage you in (a trick to catch you off guard when you dodge left and right), use the Shockwave to deflect. Watch out for that occasional middle laser that beams out. Don't even try to dodge it. Shockwave again.

I quite liked the game. For a casual game I don't want hair-pulling ikaruga-hard, I want fun, upgradey, obliterating baddies action, which is what they delivered. There was an awful lot of junk flying around on the screen, that's for sure.

One comment, though:
For a game like this with achievements, how can it not have an achievement for finishing a level with full health, killing every enemy, or picking up every coin on a level?!