Secrets, much like annoying songs, seem to come up when you least expect them. For Prince Snowe, long-kept secrets are quickly unraveling as he finds that his deceased parents have left him a legacy marred by less than admirable deeds. In Star Stealing Prince, an RPG adventure game by Star Cadets, Prince Snowe will have to discover the full extent of what his parents have done, which is hard when the whole kingdom of Sabine relies on the Prince being alive and happy. 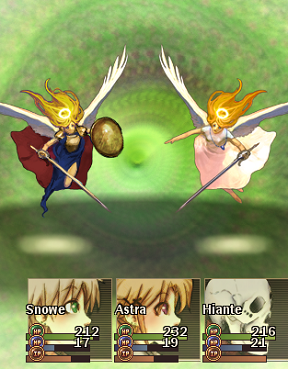 Use the [arrow] keys to move Prince Snowe to and fro, and if you're impatient with his leisurely pace, hold [shift] to dash. Use the [Z], [enter] or [spacebar] keys to interact with characters, items and other bits of scenery, and tap [esc] to access the all-important menu where you can save or work with your inventory. Enemies appear as little puffs of air on the screen and you're immediately given the option to fight or flee. Each character has a designated elemental preference in battle, such as Snowe using Fire spells, and each element dictates how strong your spell will be against a creature of a certain element. Pay attention to your health and magic point meters in battle, and watch the IP bar fill as you gradually take damage. Top it off and get ready to exact a bit of revenge!

There's more than just battles to contend with, of course. The story pushes you to explore new areas so you can meet new characters, solve puzzles, and gather items, spells, and potions like any good role playing game. Minions and bosses will be also be waiting for your party, blocking your path and making sure you haven't skimped on leveling your characters while wandering around. 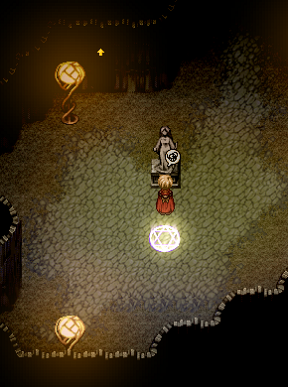 A game as robust as Star Stealing Prince is hard to find, especially in the freeware realm, so it's an occasion for excitement when you do catch that gem. With hours of playtime to chomp on, a story that is engaging from start to finish, visuals that are impressively detailed, and characters that have realistic responses, I can warn you now that if you start playing you'll find it difficult to tear yourself away. There are phantoms and chimeras, tormented souls and ominous secrets, and most importantly there are new friends to find. The old King and Queen were very fond of hidden passages, so don't let the darkness fool your curiosity. Dive in head first!

Having played it for a two or three hours (and only just having gotten finished with talking to everyone in the home town), I think I'll say a few words.

First off, Star Stealing Prince has certainly borrowed things from at least Square Super Nintendo RPG's. There are tonics, ethers, and elixirs, much like Final Fantasy 6 or Chrono Trigger. But in spite that, the beginning reminds me most of Terranigma. You start off in a secluded village--to your knowledge, there's not a whole lot else around outside your village, just like the Crystal Blue village of Terranigma. As soon as you leave the town your first objective is to head to a tower, just like Terranigma. Unfortunately, it's still operating under the same turn-based battle system as the Square RPG's, rather than going for something closer to the style of Terranigma. Isn't time we see more action elements incorporated into RPG's? How about using specific keys to cast particular spells?

It's clear that it's going to be an interesting mystery story, but at the same time, I'm getting more and more worried about games like this nowadays. Everyone seems to want to do semi-existentialist stories that mainly make you wonder, "Hmm, is this a dream? Or something like the Matrix? A parallel universe? What's the deal with all those blank books?"

And one other thing. You'd think that with so many unanswered questions--and considering how Snowe just spent an entire night awake searching his castle library for information, he'd have very open ears to listen to what other characters have to say. And yet, when his adviser tried to tell him SOMETHING about why Snowe shouldn't embark on his quest, Snowe wouldn't listen.

is repeatedly warned by his adviser that he shouldn't go freeing the girl that his parents locked in the tower.

Now I'm not necessarily bugged by the fact that Snowe went off to rescue the girl. What I am bugged by is that he evidently refused to ask what the adviser meant by that. You can go back and talk to the adviser, but he just repeats that he doesn't think you should go. Yet . . . why? Where is curiosity these days? Why doesn't the game designer give the player the opportunity to ask the adviser exactly why Snowe shouldn't go? Let's see what he has to say. I'm guessing this decision is most likely going to come back to haunt Snowe later, probably in the form of some strange pseudo-existential, horrific crisis, maybe much like Crystal Blue and Ark in Terranigma even. But I guess railroading players is hardly a new shortcoming of games. I just kind of wish they'd write a book instead, or maybe create a Youtube video.

Two more things before I go back to the game. One, I think the system for talking to NPC's should be revamped. Again, I know the game is staying in the tradition of many classic RPG's, but just because you use dated graphics doesn't mean you should use dated gameplay. Specifically, I'd like to see something like either the Avernum/Geneforge series, or maybe like in Oblivion and The Elder Scrolls games. And last year's FTL did a pretty good job too I think. Give the player several different points to talk about with characters, and when those talking points are exhausted, let the player know. I just don't like it when I have to talk to a character five or ten times to make sure I've heard everything they had to say. In case you haven't played or haven't noticed, MUCH of what the NPC's say is RANDOMIZED. With randomization, even after talking to an NPC ten times, how can I know for sure I've heard everything they had to say?

And the last thing: this game actually reminds me a lot of Snowdrift, which was featured on Jayisgames back at the end of July I think. Just as in Snowdrift, there is lots of snow of course, but also, the snow apparently never melts. Likewise, it's all a big, dark mystery, without any explanation, as yet. Also you get a fairly lonely vibe, as the town is separated from everything else in the world, though there are others there besides yourself. Also like Snowdrift, I'm wondering if horrific dreams, and horror in general, are going to take a front seat.

So that's it for now. Maybe I'll write again when I finish the game, but that's my first impression.

I remember submitting this as a suggestion for review a while ago, glad to see it here.

Iconian, everything you've mentioned is explained in the game, just not immediately. It certainly isn't like Snowdrift, as there's little ambiguity or unanswered questions

I had never noticed the randomized dialogue before though; I started it up again just now to check, and I've already found that the school teacher has randomized dialogue. What people say the first time you talk to them is fixed, so you shouldn't miss out on any major story points. I agree that it's irritating though.

Speaking of annoyances, there is one thing I'd suggest to save people a lot of backtracking.

Get the rope and the lantern from the top floor of the school before you leave town. The lantern is highlighted with a blue sparkle, but the rope looks like part of the background. You get an extra scene and some amusing dialogue if you leave without it, but heading back to town for it MUCH later in the game isn't worth it.

Thanks irishman. I'm already starting to have characters explain the story, but what I wrote was just first impression. Apparently there was a reason the adviser didn't tell you why he didn't want Snowe venturing out. It still would have been nice if there was actual dialogue, before Snowe leaves Sabine, to show that Snowe specifically asks the adviser for information, and the adviser doesn't give it.

Jeez, just finished naming 15 catty statues. Just like a bunch of school girls that mostly all hate each other.

I'm stuck... I've arrived at the floating island (chapter four), where the sepulchre is, but there is very little to explore. I've killed all the monsters, talked with the scarecrows, opened the chambers in the building except for the one with the sword, and now I can't make any further progress. Any ideas? Some hidden areas I've missed? Help!

I mean chapter five, 'The Sepulchre of a Lord'.

metalhamster, is this after the hedge maze? One thing I can remember that you might have missed is

a room with a rug in the centre, alcoves to the left and right, and two enemies. One corner of the rug is turned up, and can be interacted with to reveal a trapdoor.

I just remembered something else! This seems more likely to be what's keeping you from progressing

There are switches on the statues in the outdoors area. Pressing all of them reveals a ladder in the room with narrow walkways. You'll know you're in the right room because Prince Snowe will say something like "that ladder wasn't there before."

Thank you, irishman! Sadly, I'm stuck exactly at the ladder... it leads to a room with a monster to fight, but there's nothing else in the room. I tried to walk through walls, search for secret doors etc. in vain. Oh well. At least the scenery is beautiful.

Nevermind, I figured it out. And now I feel stupid.