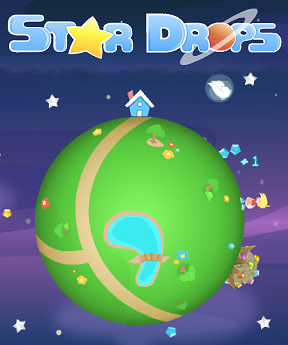 Mallow didn't mean to rip his sister's Best Friend Bear. He just wanted to play with it a little too! She should really learn how to share. But now she's up in her room crying, and Mallow feels just awful. Fortunately, there's a sale on Best Friend Bears at the local emporium. What's more, they accept shooting star gems as currency, and Mallow's little planetoid is constantly pelted with them! It's time to get to work. Star Drops, an upgrade-centric action game by Plixik, will have you flying pretty close to the moon, and playing amongst all sort of stars!

Use [right] and [left] to move clockwise and counter-clockwise around your radially-gravitied planet. Your goal is to collect as many gems as possible in each round before time runs out, so grab them when they hit the ground, or jump with [up] or [spacebar] to snatch them out of the air. You can only grab so many before having to return home and deposit them. Hitting jump while in the air will turn you into a shooting star, just the thing for smashing large meteors into more easily collected bits. Power-ups will freeze time, increase the rate of stars falling, or improve your speed and jump abilities. Between levels you can purchase upgrades, all the while saving up for the Best Friend Bear of Mallow's sister's dreams. Star Drops is a fun and quirky little game that manages to balance fast-paced action with soothing music and visuals. Certainly the ethereal soundtrack and planet-running mechanics reminds one of Super Mario Galaxy, but Star Drops is cute, flashy, and plumber-less enough to be its own creation. It's a little slow to start, but after a few upgrades to Mallow's speed and jumping, Star Drops really begins to shine, and you'll want to play right to the end.

This game was such a great reminder for me that good flash games don't have to be intricate marvels of convoluted coding. They can be simple ideas, presented attractively and with a heartwarming storyline. This game was so very simple that my brain refused to accept that I was actually finding it fun, and started a walkout in protest. Still played it, and loved it.

Very cute game, and easily playable in a lunch hour. I can't help but wonder: why couldn't someone just sew the bear's arm back on? A needle and thread could have saved him DAYS of trying to catch stars. Although I'd rather jump up high and collect rainbow thingees instead of mending, too.

This was really, really cute. Expect a walkthrough when I'm more awake :D