If you've ever wondered just how that well-worn butt groove in the captain's chair on a starship would feel beneath your keister, wonder no more since WarBalloon's addictive iOS simulation Star Command wants nothing more to put you at the helm. Everything seems hunky-dory when you're made the captain of a brand new ship in Star Command fleet, but no sooner have you learned the ropes than you suddenly find yourself accused of a crime you didn't commit, and at the center of a conspiracy that might cost you your life. With an entire galaxy teeming with alien races, each with their own agendas, and an entire army on your tail, what hope does one lone starship with a skeleton crew and a rookie commander have? 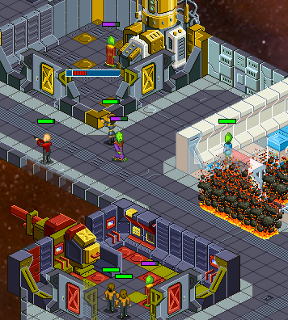 In a lot of ways, Star Command's gameplay closely echoes FTL: Faster Than Light. You hire crew, assign them to various rooms so they can improve the associated functions, and direct them around the ship to deal with hazards like fire or enemies as they appear. A room needs to have a crew member assigned to it to work, so always make sure you have someone manning the important things like weapons, and remember you can reassign anyone to anything on the fly... though of course they won't be as good at their new station as a crew member who's been working it for a while. Throughout the course of the game, they'll level up by taking part in missions and battles, growing more capable... unless of course they die, in which case all you can do is replace them with someone new. Everything from building and upgrading rooms to hiring crew takes tokens, available in red, yellow, or blue flavour, and since they're gained from successfully defeating enemy ships, you'll want to take swings at foes whenever possible.

During ship battles, weapons and other abilities like dodging slowly power up, and when full, can be activated by tapping the appropriate icon at the bottom of the screen. In most cases, you'll need to take out an enemy's shields before you can start plugging away at their hull... though of course they'll be trying to do the same to you! When (not if) you find your ship invaded, every crew member can be attacked, but only your valiant red shirts can fight back, and only your blue-coated science team can heal anyone. As a result, you have to pay attention to everything at once, manually directing your people to respond to threats and tasks while you keep an eye on your charging weapons. If your ship gets damaged, you'll need to send a yellow engineer to repair it, but watch out! As well as having the potential to set the unwary on fire in a fashion I would call morbidly hilarious, explosions can even rip holes in the hull of your ship, allowing any nearby to be sucked into space and instantly killed. Bummer if it's a handsome young ensign with a twinkle in his eye. Game-ending if it's your captain! 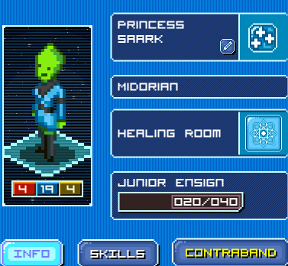 Analysis: Make no mistake, Star Command is one comely little gem. The art is beautiful and colourful, packing detail in even the tiniest objects, and the soundtrack is not only exceptional but perfectly fits any given situation. There's just something about a momentous orchestral piece that makes you want to laugh like a maniac as dozens of expertly timed laser bursts rain down on your enemies. Aside from the structural similarities to FTL: Faster Than Light, Star Command obviously takes a lot of cues from an unknown little property you've probably never heard of called Star Trek, right down to crew classes and associated colours. I may or may not have spent an unhealthy amount of time ticking through potential recruits until I could perfectly recreate the crew of the USS Enterprise and assign them all to their proper stations. You know... mostly proper. Engage, Ensign Picard! 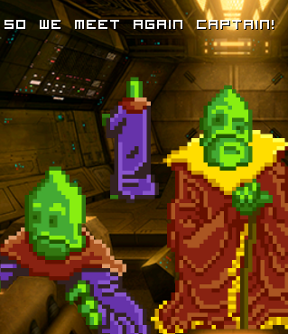 Unfortunately, the tooltip tutorial is so woefully inadequate that it leaves out some of the most important basics, leaving you to fuddle through on your own and try to figure out how to fire lasers, how to earn ammo and why, and so forth. Moreover, It feels like the difficulty curve is more of a difficulty cliff, and after the first two missions things get absolutely ruthless. Managing your entire crew quickly gets hectic, especially since they have such poor pathfinding and are, to be frank, stupid. Occasionally reds will stand and obliviously take fire from an enemy within range behind them unless you turn around, and engineers will stand around picking their nose when something is broken a few steps away. The ability to create squads of crew members so you can direct more than one around at the same time would have made an enormous difference. It helps to know to really fill out your crew as much as possible with a handful of reds dedicated to responding to invasions and a couple engineers on call for whenever things get set on fire. Like other crew members. Again... hilarious.

None of this makes the game bad, however, just something that could have done with some streamlining for useability. It's not meant to be an easy game, and every battle will require your full attention and involvement. You need to have your crew in constant movement, especially when battling intruders, and neglecting the screen even for a moment can mean half your staff gets sucked out into space because you didn't notice the enemy targeting the wall beside them. These make for the sort of satisfying victories that make a game memorable, especially against the backdrop of the backstabbing main campaign. You'll need to spend some time getting the hang of those, specifically those weapons-related minigames, but if you like harrying real-time simulation action, Star Command is well worth checking out. There's a wealth of love in its design, and fans of sci-fi space opera intrigue with challenging gameplay will love it right back. Even if there's no option to send Ensign Riker down to woo the alien queen into supporting you. Oh well. Maybe next update?