Stack Overload is a mobile puzzle game from Bonus Level that feels like a cross between WarGames: WOPR and a memory game. It's your job to crash a series of increasingly complex programs by causing memory overloads one block at a time. This isn't as complicated as it sounds, as all you have to do is match pairs of tiles by turning them over one at a time. Overload the stack and you'll move on to the next level! 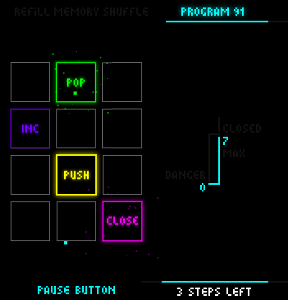 Simply tap/click a square to turn it over, then tap a second to see if you made a match. If you did, you get to go again, otherwise the tiles flip back over and your opponent takes a turn. Up to three matches can be made before the board shuffles. The goal is to send as many blocks to your opponent as you can, overloading it's stack and causing it to crash. The tiles you match have different offensive and defensive actions, allowing you to add a bit of strategy to your attacks. For example, Pop removes a block from your stack, Push adds a block to your opponent's stack, Inc increases the max size of your stack, and so on.

Stack Overload can feel a bit random at times, leaving you to peck away at a set of blank squares hoping you can score a match before the board resets. The better you get the weaker that sensation becomes (until the Swap tile appears, yeesh), but it does subtract from the overall puzzle feel and turn it into more of a memory game. Two modes of play allow you to customize a quick round or run through the story, which features a snarky computer talking to you, just like you'd expect. Overall, it's a great game that requires just the right amount of brain power to be a short, casual diversion.

This game seems like it could use a 2-player mode... or a physical parlor game adaption.

This would be nice as a two-player game, and maybe with some different buttons. The trouble is that POP, INC, and CLOSE basically do the same thing: they cause you to be one more PUSH away from death. The only difference is they each have their own limits. POP is useless when the stack is empty, CLOSE is useless when you've already CLOSEd, and INC is useless when you're already at the maximum. So there's no strategy in terms of picking between them, because at any given moment you've got some that do nothing while the rest are all equivalent. Similarly, the sole difference between DEC and PUSH is that you need to use a PUSH at the end to win. So for the most part there are just two different functions in the game. SHOW is interesting when it comes up, but SWAP is just silly.

It seems like the board randomizes after each play - if so, it's just pure guessing each time, isn't it?

Not entirely so: the board is randomized after 3 correct guesses and their tiles have been removed from the board. So, memorization does benefit the skillful player.

On the final boss the enemy stepped on a Swap on their first move, followed by a Show. Shortest game ever.