So you've decided to sneak around a highly suspect security company headquarters. You will need the following tools: one extra large flower pot (preferably containing a ficus tree or similar), one infinitely extensible length of rope and one fedora hat. Why the hat? Because it looks cool. Now you're ready for some stealth action in Spy 2 by Wildcat Games, and you're trying to figure out just what nefarious schemes are unfolding behind the nondescript front of Live Inc. Use the [arrow] or [WASD] keys to walk, and up or [W] to interact with objects. Don't get spotted by security cameras and guards or you'll get busted! 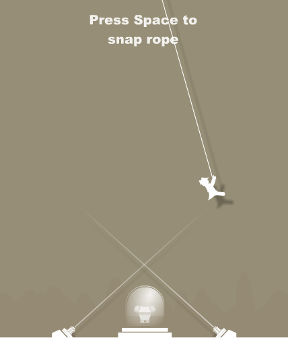 Our protagonist isn't exactly James Bond, so there are no gadgets or lasers or gadgets with lasers. We're doing things old-school here – it's mostly lying in wait and tiptoeing around. This might sound a bit slow, but Spy 2 is packed with short & sweet stages and introduces enough new elements to keep you entertained and challenged. And what better way to complement a stealth game than with a grey/white minimalistic setting? The oh so smooth visuals set the tone perfectly and will undoubtedly get you in a noire mood. The classy graphics and the jazzy music clash a little with two relatively risque adult images which pop up as you're doin' your spyin' and mindin' your own business, but they can be chalked up to the game's quirky sense of humour. The real problem with Spy 2 is that it's too short; it pretty much ends just as you really start warming up and that's simply not fair. It's easy to see that a game like this one could have squeezed in at least ten more levels without breaking a sweat, so it's a pity to see it end so quickly, and in a somewhat deus-ex-machina manner. Still, it will amuse you with its silly ways and give you your quick action fix for the day, and sometimes that's all you need.

After moving the crates, go down the vent.

Cute game. Not much more to say about it.

The escape is bugged (unless this game breaking function is actually a feature).

As long as you make it to the next screen before the alarm triggers a reset, you can ignore it.

Cute game, but yes I got the forklift bug too. Somehow the forklift jumped up to the top level and the boxes evaporated. The little roving guard got stuck in a corner though so I just walked unimpeded to the next level. Very strange.

ChaSpectre, I noticed the same thing. I got frustrated with an area where I couldn't get past the cameras so I

and all of a sudden I'm outside.

Standing alongside the moving vehicle. Then I jumped, disappeared (presumably into the vehicle or hanging off the side or something) and

the cutscene continued and I won. I think it's a bug.

I got to the escape, made it so far (past 2 guards) but kepting hitting a moving camera that put me back to the 2 guards who I then couldn't get past.

FYI, once the alarm is going off you're pretty much running until you escape or get caught.

ROYALLY sucks that it doesn't save or remember where you left it and forces you to restart from the very beginning.

Cute game! Liked the music and the aesthetic, puzzles were really basic though. The escape is pretty buggy, but in the player's favor. I loved the part when

You have to walk between the dog and the guard

bathroom scene - so irreverent, so good.

The people having sex in the bathroom felt dirty and unnecessary.

@Leoj0eRHY69GNEFT33XtTU: My game saved; whenever I got caught it would send me back one or two floors, but never to the very beginning.

It was great to be a plant; bathroom scene was funny; loved the way he crawled through the vents. The controls were intuitive which made it easy to progress unless, of course, I got caught, which I did a number of times. Too short!

To my shame I did spend some time right at the beginning trying to shed the flowerpot .. a face palm moment!

Um, can someone help with the room where

jeez, talk about POP -- very next try I got it.

Not too bad. But I gave up at

the swing part. And I almost gave up at the forklift, because the guard busts you by simply seeing the crates in a different place. The way I passed him was kinda bugged, because he definitely spot me as I went down the vent, but the scene changed before and when it restarted, I was at the swing part. Then I gave up :P

you have to brute force the code

It is frustrating that when you get caught on some levels you have to start over on the level before. Why not restart each time on the level you are on? I had to stop playing because of this. Thanks.

Quick and mostly easy game (aside from having to redo certain annoying levels multiple times because the game does not have a checkpoint on every level), but I still enjoyed it for the most part.

That was my thought, too. I guess that's where the :S rating comes in.