Hello boils and ghouls and other netherlings. Since this is October, the spookiest of months, I thought we'd try something new with Spoopy Saturdays. Each Saturday in October (culminating in a Freaky Friday of our best horror games!), we'll be highlighting free and freaky indie horror games best played with the lights down and the sound up. This week, we serve up an otherworldly survival simulation where you really don't want to be caught out at night, a girl who goes in search of memories she probably should have left buried, and a seriously scary you guys I'm totally serious game where it's up to you to serve up the scares to unsuspecting dupes! 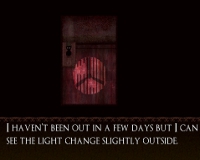 Rust and Blood - If you think performing a series of obscure, profane rituals to open a "gate to Eden" sounds iffy, congratulations, you're officially smarter than the protagonist of SnowOwl's freaky survival simulation... or at least less desperate. Now you're trapped in an ominous, dark world where food is scarce but predators aren't, and in addition to scavenging for things to eat or cook, you'll need to hunt for a way back home by solving puzzles and making progress. Rust and Blood is wonderfully eerie and, most importantly, weird, though managing your vitals gets a little frustrating. If you want bizarre and surreal surroundings and menacing monsters, this is the one for you... just make sure you're home before it gets dark. That's when things get really dangerous. 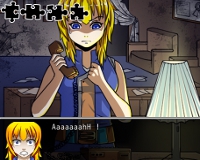 Promise - In this horror adventure from Khalil, our heroine Mia whose childhood nickname should probably be Mia Mia Bad Idea, has been having a series of disturbing nightmares that she believes are probably connected to her childhood... which, unfortunately, she can't remember a second of. She manages to convince her adoptive mother to tell her she came from an orphanage that seems to have vanished, and goes in search of her origins on a mysterious island. Though light on save points and probably in need of a good coat of polish, especially in regards to what seems like a patchy translation, Promise offers some great atmosphere and chilling original artwork for fans of jump scares and seriously crazy-campy stories will enjoy. 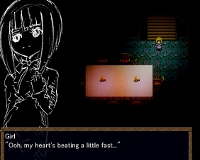 Moonlight Ghost - Translated by vgperson and crafted by Tachi, this supremely cute and whimsical little game is all "boo!" and no bite as it blends arcade and puzzle elements together. Across each chapter, you'll need to use your powers as a ghost to try to indirectly influence people around them... namely by scaring the pants off them! Throw in some adorable artwork and an interesting tale, and you have a game that's definitely spoopy as well as more than a little sweet.

Spoopy? Is that like being haunted by the ghost of Snoopy? :-)

As I understand it, "spoopy" is a term that comes from a foreign-made Halloween sign, which showed precisely that weird spelling of "spooky." Cause y'know, memes.

I assume these RPG Maker games only run on Windows, though?

Haaaaaaaaang on Spoopy, Spoopy hang on...

Come on, I'm not the only one who thought that when I saw the title of the new feature, right? Right...?

Moonlight Ghost can be run on a Mac through the use of RPGHub as vgperson recommends, which is a free tool that allows people to play most RPGMaker and Wolf games on Linux and Mac. :)

Rust and Blood and Promise were both pretty frustrating (instant death with no warning isn't scary or fun), but Moonlight Ghost was adorable!