The year is 1983. Space is being conquered by man. However Xanadu, a research space ship that was searching the far edge of the explored universe has sent out a distress signal. Called in to help them fix their engines and get them back home you are the first one to find out what happened to the three man crew. You soon discover there is a lot more happening on the Xanadu than just mere mechanical issues. Spirits of Xanadu, by Night Dive Studios, is a, indie first person horror adventure game where you must explore the ship and fight off the ship's security system while you solve nonlinear puzzles. With four types of robots, all ready to kill you on sight, you need to blow most of them to pieces or use their own systems against them by shutting them down sneakily. If a shoot 'em up game doesn't pique your interest, you can actually change the game to make the robots passive and get lost in the mystery and swallowed up in the creepy atmosphere. While this game doesn't have creepy monsters after you, it's going to definitely get your heart rate up and your adrenalin pumping with the immersive environment. You'll also be grateful for the multiple endings so you can go back and play it again. 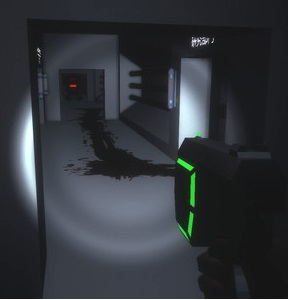 After looking at the screenshots you might not think you'd be able to get lost in the game but you'd be very, very wrong. Even without headphones it's easy to find yourself immersed in the game's world. There's a lot you can mess with that doesn't have a real purpose, like flushing the toilets or cooking some toast, and you can even go in and change the gender of your character. All these touches help add to the game, but they do make it a bit more difficult. It's hard to tell what you actually need and what is useful, or what is just there for aesthetic purposes. The only other stumbling block is the default controls, which seem to be all over the keyboard and mouse. I'd really recommend going in and changing it to your preference. You can even use a game controller, but the default for those buttons doesn't even have run attached to it. Most actions in the game that you perform, like picking up pieces you need to repair the ship, or opening up drawers to search, tell you on screen what button to hit, but for all the smaller options, like choosing your flashlight and crouching, you're better off changing those to your preference to avoid any frustration that will take you out of the game.

It is the story that really makes Spirits of Xanadu the amazing game that it is. It's found through autologs, scraps and forums left by the crew, and small touches here and there, like the birthday cards from the crew members to one another. The story is told through their eyes, and it won't be long before you're questioning if you can actually trust them or not. It is a heavy story where an ending that is simply a few sentences will leave you with your mouth hanging open. There is a lot to be found in this game, especially those puzzles that are nonlinear. You'll find a locked door and have to really search to find the code to open it, while the whole time you're left wondering if there really is a code for it and you're not just running at windmills. If you're looking for a more straightforward, task oriented game, this isn't it. But if you want a chilling experience, pure exploration, and a story that will stick with you for a while, then you can't pass on Spirits of Xanadu.

Windows: Get the full version

Linux: Get the full version

I purchased it, then regretted it almost immediately once I experienced the controls. Having to hold the mouse perfectly steady to keep a video screen from jittering all over the place while I try to activate a link just isn't my idea of a fun gaming experience.

Hey abfdrumz,
You can change the sensitivity of the mouse by going into options. I believe its called 'Look Sensitivity'. I'd also adjust the controls before you really get into so you can find what works for you.
Hope that helps!

Thanks, Lori. I'll see if that helps.

NOW I understand why there are absolutely no comments other than the 3 made on the JIG release date:SpiritsOfXanadu.com no longer exists = no game to download and play.

Sorry, I'm not sure what you mean. :) The official website is up and running and all the links work.

I come over here to see if there was a walkthrough or hints-- I'm stalled out.