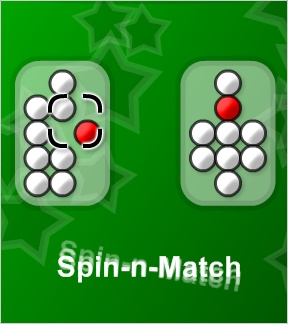 In an appropriate effort at justifying their name, BubbleBox has sponsored a game in which you play with bubbles in a box. Isn't it delightful how these things all work out? Spin-n-Match, by Jess Hansen, is a simple puzzle game that will torque your brain to its limits.

On the left, you see a grid of jumbled up balls. On the right, you see your target formation. Your task is simple: Make the left look like the right. This is done by rotating clusters of four balls (with your mouse or the [Arrow Keys]/[Space Bar] combo), similar to Bejeweled Twist. It doesn't matter which ball goes in which spot, so long as the colors match. Once you match the image, you're on to the next puzzle.

There are forty patterns to solve, which increase in size and complexity as you go along (such as adding in more colors). Once you figure out the techniques to manipulate the balls in the way that you want, solving the levels is pretty easy. However, the real challenge lies in trying to meet (or beat) the developer's target number of moves. For most levels, the target is 4-8 moves, but can you plan ahead to meet the goal on your first try? Can you conquer the tasks with brute force and trial and error?

Analysis: What makes Spin-n-Match interesting is that at the heart of a very simple game, you have two possible levels of difficulty. You can try to simply beat all forty levels, which can be tricky enough when you're struggling to figure out the best way to switch two misplaced balls without ruining the rest of your progress. If that's too easy, then you can go for the developer's target scores, a task which could drive you batty.

Either way, Spin-n-Match is a nifty little puzzler that'll keep your head spinning. (Fifty bucks says you saw that coming.)

Is it just me, or are there times that you can solve the puzzle without it accepting it (I know I've solved it because quitting out and going back to the level, with the same moves, works fine).

Weird. Also, ugh, really? Have to play all the levels in order? That just grates for some reason.

I didn't see that last comment coming - where's my fifty? ;)

Fun game. Sometimes I miss the obvious answer though, and end up clicking a hundred times to correct it.

Great game! I usually don't comment, but this game was awesome. I couldn't stop playing, then it told me the game was over. Good fun!

It was alright, but I'm not sure he put much thought into it past "Here's a puzzle, do it". I frequently and without much effort found solutions quicker than the developer's best, which leads me to believe it was just made and they found a way that it worked and did that. If they wanted to make a challenge that's fine, and I've certainly seen very complex puzzles where you might be able to find a more optimal solution because the actual solution is very tricky, but I just felt like, with as few moves as these required, it wasn't as well planned.

That said, it was a good diversion and very well presented. If they put more effort into the puzzles now that they've got a good interface, this could be top notch stuff.

My puzzle-brain is not as well developed as the previous poster (but I aspire!). I found it challenging to come even close on many levels to the developer's best and enjoyed this game hugely.

I tried a few levels, but I'm afraid I feel like the game is kind of broken. I found two cases in less than ten levels where my gameboard looked exactly like the solution, yet the game wouldn't accept it. The first time I just spun some dots around until they ended up exactly where they had started and the game accepted the solution for some reason. The second time, I just quit.

Please adjust your tagging system - the tag "macwinlinux" suggests that a game is playable unter MacOS, Windows or Linux. This doesn't apply to SWF games!
(And no, I don't want to install a windows firefox via wine - If it's tagged as "works under linux" than it should work under linux without major tweaking!)

Well, the power of commenting seams to work even for shockwave flash - now it works. Strange.

ok, that spoiler didnt go too well. ill say which corner to click.