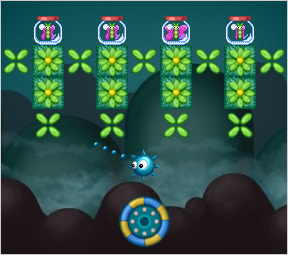 A crowd pleaser from one of our Friday link dumps, Spikey's Bounce Around is another casual game offering from the budding and talented team at Donut Games, of Sweden.

In this arcade action game you are given 10 tries per level to release all the butterflies while accumulating points. Butterflies are sealed in jars that must be broken to release their contents. A jar will break if it reaches the ground, thereby setting the trapped butterfly free.

Your only recourse to save said butterflies is to toss a little spikey creature around the play field to plow through the plants the butterfly jars rest on. You will have to plan your moves wisely if you are to release all butterflies for a level. Make use of the wooden (brown) wall structures to reach higher areas, since some wall structures spikey will cling to and, in later levels, some items spikey will bounce off of.

Control is entirely mouse-based. Aim the trajectory for Spikey by positioning the cursor where you want it to go, then click the mouse button. Release all butterflies to advance to the next level.

Analysis: With simple to grasp, intuitive controls and colorful pixelrific graphics, Spikey's Bounce Around is a delightful game to play for people of all ages. It's a light-hearted game that offers a relatively simple challenge, and that's a good thing. The game plays a bit like the recently reviewed Peggle, only in reverse. Instead of shooting down at the items and locations, you shoot up at them.

I did encounter a small bug with one of the levels, however, but nothing that will ruin the experience for you. In one of the games I played, Spikey clung to the wall on my last shot before the last jar reached the ground, which released the final butterfly. The game told me I had failed, though, and I was forced to replay the level again. A relatively minor issue that probably won't occur that often.

Another hit from Donut Games. Looking forward to what they come up with next.

Please reload the page. I had some trouble earlier with the page, but it should be fixed now. And the Donut Games website appears to be fine as well.

Thank you for recommending this! I wouldn't have tried it out otherwise, but it was a lot of fun to play. :)

Great game...lots of fun to play. Definitely dangerous at work, but a good timekiller.

Pretty interesting game, good for a bit of time wasting. Graphics are interesting, not really the kind I like though. Overall, a pretty cool game :)

Once the bees come out I'm pretty much screwed.

I agree with Suho .. once the bees come out its pretty difficult - Short and simple game lets you dive right in .. Fun =)

I really enjoyed this game as well - but like others, once I hit the bees, it was game over for me!! But it was a lot of fun up until then! :)

Huh. I remember playing this when It came out, but I also remember it being much harder. I guess I got better! Schweet.

Nice game, but when you come far enough, it is quite painful to start over again.

Level codes are a much needed feature!
Other than that, good stuff!

I thought they were wasps?

Ya fun stuff but it sucks to start all the way from the begginging every time.

I can't play on this computer to check this out, but hadn't you failed? You may have beaten the level, but you couldn't very well advance to the next without Spikey...

Got a 1-shot on level 5. Reminded me of all those times I was playing sonic2 and could put the controller down and wait while he bounced around the bumpers.

Very good game. Although being able to earn extra lives (and having level codes) would be a welcome addition. Level 13 is insanely hard ;)

Not bad, but I can't really play this game because I don't have the patience to go all the back to the beginning every time I make a mistake and have no shots left.

On that one level:

your goal is not to free the wasps, it's to free the butterflies. Leave the wasp jars alone, and you can beat that level quite easily.

I like this game a lot but there is a really bad element in the design that needs to be fixed.

Level five is the first level to take off energy.

Losing energy here or in any of the levels after for the first few times through isn't too painful.

However, later on it is a source of frustration. If you lose energy here you can just throw away your game.

The aiming game screen isn't big enough and the aiming isn't accurate enough to have only three points to loose through eleven stages.

Castle Smasher gives the option of more defenders or more projectiles after each level. This game could do similar. Reset the energy each level. Give chances to gain more. Or maybe even let people continue the game at some point.

Almost all of the emulators for old school video consoles have a way to save the state of your current game. Is there anything like this for online games?

I can't get past level 38. can anybody help?

Omg. This game is mighty addictive. Haha. But I'm stuck on level 38, "this may hurt a bit". Anyone know how to get past it? ; D

just done it. take out the left hand butterfly via timing your release and bouncing off the screen bottom,spikey then sticks to the wall,next move is to time your release going over the rotating spikes and the trajectory should enable spikey to fall onto the right hand side butterfly releasing it.

I am playing on the Iphone app, not the computer, if anyone knows how to beat that level!

Katie I'm on iPhone too. To beat that level fire spikey to the left wall and free that butterfly at the same time. Then fire above to the top it doesn't matter about the wasp. spikey should stick back on the left wall if he doesn't start again. Then fire spikey over the middle wall. From there it should be easy :)

I'm stuck on iPhone level 35 if u get to that and beat it tell me.

I play on the Iphone also. Any suggestions on how to get past level 38 "this may hurt"? Been trying to get past it for a week now.

Does anyone know how to beat level 45 up and back down. Always 1 shot short

I play the iPhone version and have 3 stars on every level bar 1. Could anyone tell me how to get 3 stars on level 33 - stinger swinger. Really annoying nnow

I also have 3 stars on every level except 32: Stinger Swinger. 3 stars requires 900 points, but the best i have done is 713. Did you ever figure it out?

Finally! I was stuck trying to get three stars on stage 32: Stinger Swinger also, but I finally did it.

First jump should be up and to the right, off three bumpers, and end up on the left wall, almost even with the horizontal bumpers. My second jump was aimed just to the right of the center of the top left circle bumper, and Spikey took care of the rest. It took me a few hours of trying this before it worked, but I did it a second time within 15 minutes. Score= 1,058

I need help with the lvl called staircase thanxx

1) aim your shot at the brown edge of the top left flower
2) you should go over the wall, bounce off the floor bumper, rebound off the ball, off the floor again and then up over the final wall freeing the butterfly and (possibly) clearing all remaining flowers

I am stuck on level 38! Help! Driving me nuts! Where can I find a solution?

Can someone plz help me finish this game...I always need one more shot on level 50!!! I'm going nuts!!!

LvL 45 is annoying the crap out of me. Haven't used any walkthroughs yet, but would appreciate if someone could post a link to a utube video of how this is done, the comment above, while descriptive, only gives the common sense strategy. Please post a video? =X

i am playing on my ipod but obviously am now on the computer and i am stuck on level 35 called staircase can anyone help?