Spider: Rite of the Shrouded Moon

As a human, I'd be too scared to sneak around an abandoned mansion, especially on a rainy night. But as a spider? Sure, I could do that, especially if there's no people around to crush me under their shoes. Tiger Style Games, makers of Waking Mars, lets you explore the mysteries of the estate in Spider: Rite of the Shrouded Moon on your iOS device or PC. Tap and hold to make your spider walk, or swipe to make it jump. Tap on the spider to make it crouch. When you jump starting from a crouch, a strand of silk will follow your trail. If you land on a surface close enough, you'll anchor the strand and create the side of a web. When you create any geometric shape the web will be filled in, ready for bug catching. 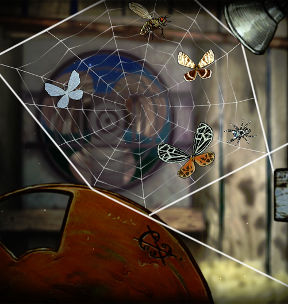 Keep in mind that all sides of the web need to be made with a strand--using the wall for one side won't work. For the most part if a bug flies into your web, it will stick there for you to chow down on when you want, which will replenish your silk to a cap of 20. If you run out of silk, you have a few seconds to eat a bug or perish. Each bug is different, however, so there are some exceptions. Ladybugs are able to free themselves after a few seconds, for instance, while dragonflies need to be stunned first. Still other bugs don't need to be caught in a web at all. You have to tackle hornets mid-air, and chase down ants, often in a top down view. The game isn't only about catching bugs. Exploration is rewarded by finding bugs hidden away in drawers or other out of the way places, and in finding clues. Each area hosts a mystery, a puzzle in an often out of the way area, only solvable after piecing together information when all the clues are found. To top it all off, the game uses your location to determine the weather and time of day. This affects gameplay as different insects come out at night, and hazards like large puddles can form when it rains. There is an option to change this manually which is handy when there's no rain in your forecast for the foreseeable future.

The more casual gamer can experience the whole game and mystery with no stress--you only need to catch half the bugs on each level to progress. If you're more hard core, there's a whole different strategic way to play that involves planning out how to get the highest score possible while capturing every bug on a level. You can gain multipliers for eating multiple bugs without touching the ground--that is hopping from web to web--which is tricky, and it can even help to know the best order in which to eat the bugs, depending on their point value. At times jumping long distances (at least in the iOS version) can feel imprecise, though part of that is remembering how the spider arcs as it jumps. The artwork is lovely and creepily atmospheric, with great attention paid to details, and the soundtrack is delightful. Whether your in it for just the exploration and mystery, or if you're driven to get a high score, there's plenty here to keep you entertained for hours.