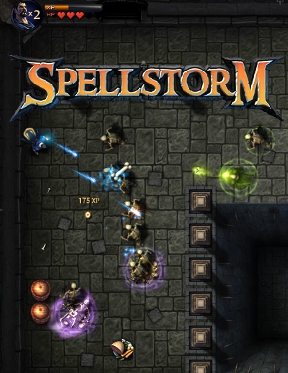 It's always nice to see a game that emulates real life, and you're a fibber if you say that Bullet Proof's top-down action game SpellStorm doesn't almost exactly recreate what the majority of us would do with magical powers. You know, the non-Hermiones in the crowd? We'd totally be all over the whole "raining extensive destruction and property damage all over the land" thing... but at least the star of this game has an excuse, of sorts, and isn't just shooting magical frost blasts from his hands for the sheer crazy joy of it. Using the [WASD] or [arrow] keys to move and the mouse to aim and shoot (and [P] to pause your game!), blast your way up from the bottom of the tower and lay waste to all the enemies you encounter, earning experience points to level up and gold to spend on upgrades and new abilities at the end of each level. Slaying all the monsters in a room will open the exit up, and don't dawdle, since taking too long will initiate a countdown that will eventually spawn an invincible beast that will pursue you until you leave the room. As in life, you probably don't want to let too many things chew on your face, since you have a finite amount of lives at your disposal... once they run out, you'll have to start the entire stage over again from the beginning.

At its core, SpellStorm is an extremely simple game, but packages the familiar concept in an extremely polished fashion. Despite the puzzling absence of an in-game soundtrack beyond sound effects and ambient noise, it's a fantastic looking game with a ton of enemies and intimidating bosses, not to mention random spell scroll power-ups and blasts, that makes it feel like it would have been a perfect fit for any arcade. At the same time, though, its simplified gameplay and lack of more in-depth customisation options means it doesn't have quite the manic appeal of, say, Larva Mortus, though it certainly doesn't lack in design. SpellStorm is a fun, frantic, and challenging break of a game that will appeal to fans of classic action games looking to fill their free time with as much monster-shattering action as they can handle, and then some.

Fun, really quite easy, and I'm certainly not what I'd call a skilled twitch gamer. Looks great.

Not bad...though I do wonder how you're supposed to see the listing of achievements you've earned and can earn. I can't seem to find the option for it. :-/

You can press [tab] or click the player icon to open the achievements screen.

Unfortunately, there's presently a small bug in that achievements are being reset per game, but we should have a new version uploaded soon that fixes that.

Also, press [space] to activate the morph powerup that turns you into an ogre, once it has been bought.

This game seems like a lot of fun but it's so laggy on my laptop I can't play it.

Reminds me of Triangle Wizard with a graphics overhaul and less customization.

6,469 Views
4 Comments
chrpa— Jayisgames needs your help to continue providing quality content. Click for details Rinnogogo in their newest game return to a melancholic, bitter-sweet story they are so good at. Your old grandma, lying in a hospital, forgot something very important at...  ...

150 Views
0 Comments
jayisgames.com— What to Study and Do from High School, Before Submitting a Resume People with good problem-solving skills, math ability, an eye for art, imagination, and good problem solving and programming skills are on the right track...  ...

How to Play Nintendo Legend of Zelda Games on PC by Using Emulators?

9 Views
0 Comments
jayisgames.com— Nintendo games are an absolute gaming delight that every console gamer craves. The latest releases of this platform are a complete package of thrill, adventure, and excitement, no doubt about that, but the retro games launched by Nintendo are...  ...