I appreciate the specificity of Space Arcade: The Game's subtitle. I was seriously worried for a couple minutes that I was going to have to deal with Space Arcade: The Hit Broadway Musical. However, as much as I crave toe-tappin' hits and elaborate choreography, I enjoy Galaga-inspired pixel shooter action even more. This appears to be music-meister Matt McFarland's debut game release, and it's so much fun that maybe he should consider quitting his day job.

There are a fair number of controls, but the basics are clear: [arrow] keys to move, [Z] to fire. Holding down [left shift] gives you an unlimited speed boost, while [X] and [C] raise and lower your base speed. There are thirty levels to play, all unlocked from the beginning. Shooting enemies releases gold to collect, the tougher the enemy the more the gold. Between levels, gold can be used to purchase new weapons, upgrade your shield, or improve your ships gold-attractor. During levels, a screen-clearing smart-bomb can be launched with the [spacebar], initially for 100 of your collected gold, adding 50 to the cost for each additional bomb. Play well, and you'll soon be recruited by the Rylan Star League.. or at least get your name on the high score table.

Analysis: Space Arcade lives up to its name with a perfect recreation of old-school action... and all the brutal difficulty that implies. Oh sure, the first couple of levels looks easy enough, but once its gotten your quarter, it'll chew you up and spit you out. Don't expect this to be a game you can just blast through blindly without any strategy: this one is packed to the brim with shielded enemies that will return two bullets for every one you shoot at it, and knowing when discretion is the better part of valor is a must. The game doesn't grant you upgrades nearly as quickly as you need them, so I guess its a testament to Space Arcade's quality that I kept playing to the end. 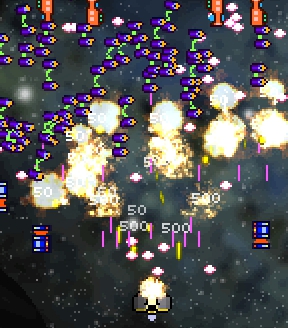 The game also has some features that I hope become common-places in other casual shooters: 1. The ability to play all levels in any order. That might be a sticking point for some. However, in my mind, since each requires a slightly different methodology, that you can skip ahead at any point to switch things up severely limited my frustration. 2. An actual reason not to hold down the fire button. Here, your ship's gold attractor gets a boost whenever you aren't firing. This might seem like a little thing... and it is, but considering how, for many, aiming strategy can be reduced to "keep thumb firmly pressed on fire button", it adds a dose of timing balance to the action. 3. The option to boost change your ship's speed with a press of a key. Not only does it ease the more difficult intergalactic maneuvers, but, as silly as it sounds, it made me feel a little bit more like the pilot of a pixelated spaceship. Ship speed can often be arbitrary in a shooting game, and giving the player more freedom in how they can beat the game is always welcome.

There are a few nitpicks. For one, I didn't like the sound design. To my ears, the modern techno of the background music clashes with the chip-tuney bleeps and bloops of the effects. Both were individually fine... just not together in the game. I eventually just set the whole thing on mute and found I enjoyed it a lot more. Also, I wish your ship's hitbox was much more obvious. It was quite difficult to tell when a shot was going to damage me or not. Considering how hellish the screen gets with bullets (to almost a motion-sickening level), it was annoying that I never quite knew how close a shave was too close. Finally, while the flurry of enemies that was level 30 was quite intense, I would have preferred a massive final boss for a climax. That's just might be personal preferences, however.

Space Arcade isn't perfect, but its willingness to shake up the traditional retro-shooter mechanics is definitely a plus. McFarlands's inspirations may clearly hail from the past, but he clearly has a sense of futuristic innovation that will serve him well. I can't wait to see more from him.

Thanks a bunch for reviewing my game. I had no idea it would do so well! Considering I couldn't find a sponsor for it on FGL, I feel I'm not the only one :) If enough people make custom levels I'm considering adding a community level pack to the game. In the mean time, I'll be working on releasing more games in the near future.

This is *excellent* - I've not quite got platinum medals on 2 of the last few levels but did so for the others.

Whether or not certain weapons could be classified as making things too easy is moot since there are always levels which will challenge the player.

I also was never a fan of the original Space Invaders (though I am from that era). This rendition is a lot of fun however.

5/5 from me without hesitation

I just cannot get 100% on the last level. I've played through 3 times without noticing any enemies escaping...who's getting through?

This is top notch mate! Unbelievable you couldn't find a sponsor for this gem on FGL, maybe you haven't been patient enough?

Anyway, next time make sure your game has been approved by CPM before launching. It's just saying "Advertisment working", instead of showing an ad. So I guess you're losing money there :-)

Back to the game. Level 18 is killing me.

This is top notch mate! Unbelievable you haven't been able to get a sponsor for this gem. Have you been patient enough??

Also, next game, wait for CPM to approve your game before launching. It's just showing the CPM approval message now, so that probably means you're not getting any money :-(

Back to the game! Level 18 is killing me!

Comment for the developer: On one level I killed every last enemy but was killed by a stray shot at the end and it said Level Failure! but it gave me a platinum medal anyway.

@Matt and those expressing surprise at lack of a sponsor: I haven't been able to find a sponsor for my most recent game either. I contacted the guy who sponsored my last one and he told me that he's taken a huge loss on all the games he's sponsored recently and isn't really in a position to sponsor any more.

Ads have been steadily paying less and less money over the years, and I think we're finally reaching the point where it becomes impossible to make even a semblance of a living under the ad-supported model.

Consumers may soon have to get used to paying for their entertainment again, whether directly (preferable) or through the bait-and-switch of "free to play" (more likely, but ethically questionable).

The game was finished in february of this year, and it had no interest from sponsors on FGL. 0 bids, 0 trackers. I really thought it was a flop, but then over the weekend as a complete whim I decided to throw it up on kong and NG. The rest is history :P

As far as the ad failure, yeah I really screwed up on that one! Haven't seen a single penny and probably wont. I'll chalk that off as experience for the next one!

Hi, nice game. If anyone happens to screw up and reset their progress like I did, there is a fairly quick way to make cash fast.

Keep playing level 19 with just one attractor upgrade and get the power up, then get $6000 to get the 2nd best weapon then it's pretty quick to get $10,000 for the best weapon

Worked for me. CHEERS!