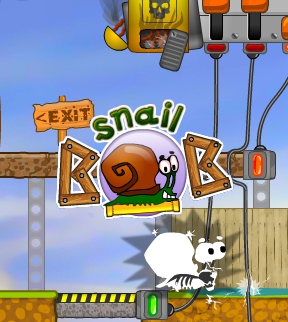 This is Snail Bob, and for some reason he's inside a construction site filled with radioactive goo, molten lava and really bad wiring. Being the single-minded gastropod that he is, Bob doesn't seem aware of how all these environmental hazards can be, well, hazardous to his health.

In this point-and-click puzzle game from Andrey Kovalishin, you're responsible for ensuring that Snail Bob doesn't die a hilarious death. Most likely intended to be a mid-afternoon diversion, the twenty levels of the game are unlikely to strain your mental faculties all too much. In some ways, the puzzles are relatively pedestrian; you'll have to pull levers to activate platforms, push buttons to move barriers and so forth. However, what makes Snail Bob so entertaining is not the complexity of the game but the sheer amount of quirky charm it contains. I actually caught myself laughing out loud in one of the earlier stages.

Short and sweet, there's actually a fair bit more that I could say about the game but part of the joy here is discovering the absurdity of each stage and that's something I wouldn't want to take away from our readers. I do have one issue with the game, though, and that's the fact that I found the music so irritatingly repetitive, I had to mute the volume before I even hit the third level. Of course, that's just a minor flaw in an otherwise pleasant way to spend your coffee break.

I like this game but I can't beat level 19 even though I know exactly what to do (I think). Any tips, anyone?

Level 19's an annoying one, because it requires quite a bit of precision and luck. To roll down the incline, Bob needs to be inside his shell.

The movable lever should be at something like 30-45 degrees when you launch Bob up the bottom left launcher, and then hit him in mid-air with the far left launcher (it may take multiple tries to have him skid off the incline and into the hole).

Wow I really love this game its adorable!

level 19 - Let Bob walk to the pusher on the right (he stops when he hits the wall), now use the left blue arrow so the platform stands verticaly. Then click bob so he is still. Click the pusher on the right & he will fall down the hole, on the way he will hit the button and land to the left. Now you can adjust the platform using the right blue arrow so it forms a ramp up to the exit. Last but not least hit the pusher bottom left and then quickly hit the left pusher and it will send him flying to the exit. :)

To get past level 19

The snail has to be sleeping before you shoot him up and to the right. Then wake him up to exit.

I can't figure out how to keep the snail from falling down on level 16. :-(

ThemePark click on him to make him stop moving, or if it is about falling of the balloon then I don't know.
PS: Is that a new reviewer?

D'oh, I had completely forgotten that you could actually make him stop. Thanks, AbstractCloud.

Can you manage to get through level 5 ? It seems like the preview of this stage in the level selector shows a kind of cart on the left, but in the actual level, it's not there and I see no way to get over the hole before the exit.
Am I alone having this issue ?

The only problems were with length and difficulty and I'm not going to hold either against this game. The sheer variety of stuff and interaction methods brings back pleasant memories of Zak and Wiki. Physics games need more stand-outs like this.

have you tried using bob in stopped form and catapulting him about the place? s

I love this game, the whole contraptions and level design is so creative!

anyone got a walkthrough?

Don't forget that you can make Bob stop and start by clicking on him. That came in really handy in the later levels where you have to set things up in order to complete the levels.

I cant seem to get snail bob past the wiring in level 17 can anybody help me ?

@Olivier: I have the same problem. Did you solve it?