What's a great sliding block puzzle game that involves charming little robots? Botiada? Oh. Well, yes that does fill the bill, but no! This one has even cuter robots and a name that looks like a preteen texted it to her BFF, Slydrs! Also free for iOS and Android, this new adorable game by the Oliver Pearl team is too cute to be frustrated by, but the challenge of the levels themselves will contest to that. The whole goal is to put the bright orange robot on equally bright buttons to make their antennas glow. Of course the robots weren't built with any sort of braking system so they slide across the screen until they hit something as solid as them. But these delightful little piles of hardware and circuit boards know how to work as a team. Help them use each other to make sure all the button are pressed down. It doesn't matter if they all get a spot or not, they can share in each others victory and so can you. 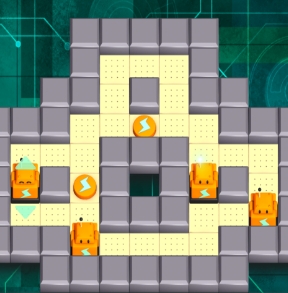 Slydrs is a cut and dry sliding block puzzler with no special buttons or tiles, and sometimes simple is better. With over forty levels the solutions never repeat themselves. It really is a test against yourself, and the perfect par number for each level which is where the frustration comes in. You'll see a solution in 20 something steps and just before you can feel good about your brilliant mind, you see the prefect number of moves is four. And just like that, the dashing robots bobbing up and down in their giddiness are not as cute as you once that they were. But Slydrs is there to help you enjoy the game, with an undo button and two ways to play, either using the mouse to click and drag or the keyboard, using [Tab] to switch between robots. Simply put Slydrs is a game where they want to make you really think rather than giving you the solutions, but doing this all with a bubbly atmosphere that puts a bounce in your step when you've cleared a level.

Anybody know how to beat 2.9 (Orange section)?