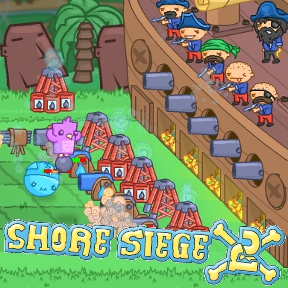 It's pistols and cannons for you in your ongoing fight to keep the monsters away from your booty. These pirates are in for blob killing fun! In Shore Siege 2, Antony Lavalle has changed the feel of the previous title and made it more of a tower defense-meets-strategy game. Arm the pirates, set cannons on the ship and position many other weapons on the ground. A life of piracy isn't cheap, so you'll also need to set up oil rigs to fund your defenses. The game starts off easy, but it's only a few levels before you're forced to carefully consider where you place your cannons and what upgrades to give them, or else you'll be forced to unleash the Kraken! Bunker down and fire away to achieve your every desire in riches, which for pirates mostly just consists of drinking lots of grog.

The difficulty ramps up very, very fast. Going from Island 1 to Island 2, and the inclusion of the fireball enemy, which torches anything OTHER than a water weapon, makes it very difficult to plan accordingly.

You can beat any level by making a bunch of oil derricks and call the Kraken every wave.

Beating levels with cannons is much, much harder.

Took me forever, but finally figured out a way to beat the waves as long as you're not aiming for 4-star perfect as it requires using the Kraken.

get as many oil drills as possible, but save 100 barrels to call the Kraken. Wait till the last possible moment, before the wave touches the drills, and send the Kraken.