Bombocracker's twee puzzle platformer Shifter is a little bit Continuity, a little bit "tiny bearded trucker hat man adventures", and a lot bit cute. Your goal in each level is to get to the door, but the catch is that doing so literally requires shuffling the level around you. While [WASD] or the [arrow] keys are your standard move/climb controls, hitting the [spacebar] splits the level into several chunks which can then be swapped around with the movement keys, which moves the square our hero is currently residing in around, shuffling the others it passes through. Hit the [spacebar] again, and they'll all snapped together in whatever new configuration you like, though you'll want to make sure scenery and obstacles line up in such a way as to let our hero move around. Doing this will allow you to help our hero, who can't do anything so grand as jump, and has a fatal allergy to spikes, to bypass hazards and reach the exit... though of course sometimes you'll also need to figure out how to power the door with switches to keep it open. 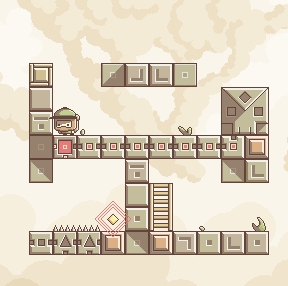 While we might have seen something like Shifter before, Bombocracker's take adds a nice level of challenge with the introduction of the electric pathways that allow you to charge and open doors. It's not enough that you weighed down the button to turn them on... you have to make sure the track syncs up to actually deliver the juice where you need it, making careful planning and placement important. Especially since you have to rely on the displacement of the box your hero is in to move other boxes around. Unfortunately, there are also times when Shifter feels perplexingly buggy, with levels sometimes loading without the player character and forcing you to reload them or visit the main menu and navigate back, and the painfully slow walking pace can start to grate. Still, Shifter is cute and clever, incorporating new elements at a steady pace as you play, and a feature like a simple counter that kept track of how many swaps you made as well as a "perfect" number of them for each level might have added another layer of challenge.

I needed to deactivate the spikes, but they wouldn't deactivate even when the red 'power line' was running underneath them.

I couldn't get myself or the box to the square right in the middle of the spike-infested platform to change anything.

Fun fact: you can drop/push the boxes over spikes either.

Wait, never mind. I figured it out.

There is one way you can make sure the box is exactly where it needs to be to drop onto the switch.

Hint: Use the square that would be blank when it's not set up right to have a red/pink bridge across the centre.

Still a little frustrating, this game. Maybe because I've played similar games that allow me to do things like jump, and I have still not lasted very long.

Soooo slooowwww... the inability to jump is really frustrating, too.

It was fun, good balance of difficulty. I never finished level 20 but that was more that I just got tired of it although the music got a little grating after awhile.

Not being able to jump definitely adds a level of difficulty. I was usually able to bash my way to a solution, though. I liked the graphics, I liked the rate at which the puzzles ramped up.