When I was in college, I discovered Vertigo Gaming's Acidbomb and ShellBlast, a pair of Minesweeper-esque puzzle games about defusing bombs with the numerical clues provided and a handful of deductive reasoning. What I didn't realize (until my roommate pointed it out to me) was that as I played, I tended to call out strings of numbers while playing, chanting them over and over in my head (and apparently out loud) until the solution became clear to me. With the recent release of ShellBlast Forever on mobile devices, I've found myself shouting numbers again, except this time, in public places. It's a bit embarrassing. 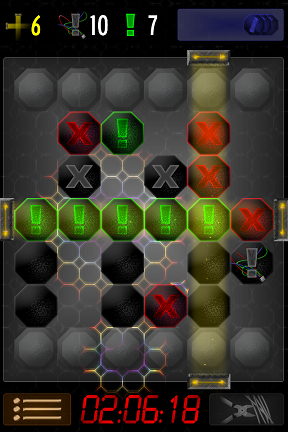 Each level is a bomb made up of a series of tiles, some of which contain deadly triggers that need to be located in order to defuse the bomb. Rather than poking around blindly until you find them all, you are given two SDUs (one horizontal, one vertical) that shine through the grid. As you move the SDUs through the grid by dragging them by their ends, they will tell you how many triggers lie in their path (the number in the top-left corner), but not where; that's up to you to deduce!

The Campaign mode gives you a nonstop string of timed bombs, with only a handful of lives and chaffs (which reveal any single tile's property) to carry you through. In the Puzzle mode, you have to use a handful of preset SDU positions to solve bombs. Heat mode contains bombs that get hotter (and more dangerous) with every incorrect trigger guess. These three modes have been featured in previous ShellBlast games in one form or another, but one new mode of note is the Static mode, where one tile must be sacrificed in order to access the bomb, but when an SDU shines through that tile, the number of triggers remains hidden.

Admittedly, it feels like a bit of tension as the timer ticks down to zero, while present in the original download versions, is missing here, perhaps as a result of a smaller gaming atmosphere. Still, the unique logic puzzle the ShellBlast series brings to the table is well worth the experience. With the chance to save the day wherever you go, ShellBlast Forever will give you an infinite supply of puzzles to tackle, and possibly turn you into a number-spouting bomb technician-wannabe as well.