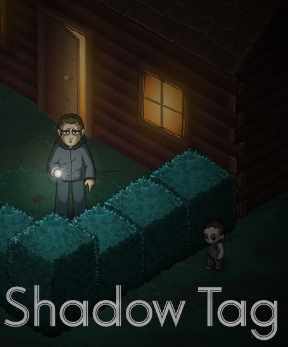 Made in just 48 hours for Newgrounds' "Cabin Jam" Game Jam, Elvidian's Shadow Tag is a fantastically creepy and well presented avoidance game, though an inherently simple one given its development constraints. Alone, at night, armed only with a flashlight and jeans that are probably one loud noise away from being several shades darker, your goal is to find your car keys in each stage using the [WASD] or [arrow] keys to move, and then make it to your car. Without anyone (or anything) catching you. The kicker is you're not really alone, since the more you play, the more the area becomes infested with strange shadow children that want you to play tag with them... and you really don't want to be "it". If they see you, they'll sprint gleefully after you, so you need to use the maze's layout to your advantage and keep your eyes open... especially since you can't run, and your flashlight's limited battery means dilly-dallying is probably a bad idea.

At just eight levels without a whole lot of variance between them apart from size and layout, Shadow Tag feels more like a concept than a full game. The inability to run like your pants are on fire is kind of silly, and since the kids themselves can run and don't really have a set route apart from heading in your general direction, it feels like success can depend on trial and error until you learn the layout of each level. That's admittedly largely due to the time constraints it was made under, which makes that "oh no oh no oh nonono" atmosphere all the more impressive, but even just some sort of opening narration or cutscene as a framing device would have gone a long way to making the whole thing feel like a complete experience... even if it was just "Dang, is this messed up or what?" Still, as a pint-sized bit of creepiness, Shadow Tag looks absolutely gorgeous and has a clever little idea behind it that is practically begging to be fleshed out even more. In the meantime, if you want a little bit of a shiver to be sent up your spine... you're it!

I almost had a heart attack.

ok, am I missing something? Like how to turn off the flashlight or sprint? I can't make it past the 2nd level.

No, you're not missing anything. You're stuck walking at that speed & unable to turn your flashlight off (not that you'd want to make it harder to see the shadow children, if you ask me). Hopefully that doesn't get in the way of the game's creepy atmosphere for you.

Try beating the game to unlock a new mode of play!

ok, I figured it out and made it to level 6. now I'm really stuck.

right after I type that, I figured it out

you have to bait them to follow you to certain places. I didn't think that they had programmed patrols (they don't), so you can influence which way they go to an extent.

Any tips for getting past level 4?

your range of vision isn't far enough to evade them effectively. Kind of becomes a game of chance. Also once I get the petrol for the car can I light them on fir-OH DAMN THEY ARE IN MY HEAD I CAN SEE A WORLD OF PURE DARKNESS IT BURNS> KILL ME PLEASE

That was creapy... on level 3 I got cornered by BOTH the childern.

Can I know if what happens when you are caught by those kids??