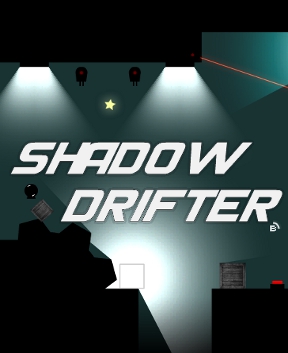 When we covered Marsh Games' stealth physics puzzler Shadow Game back in 2010, we kind of loved it a little, but it was more a prototype than anything else. Well, now you dreams of being a shadowy little stealth bot can finally come true in their entirety with the release of the full game in the form of Shadow Drifter. Using the [WASD] or [arrow] keys, move through levels collecting stars and nabbing bonuses on your way to the exit. The catch? If you get caught in the lights, then the automated defenses will do their best to bring them down, so you'll need to push crates to block light sources (and push switches) in order to make it safely through. You'll need patience, fast reflexes, and faster thinking to proceed through the levels, and an extremely high tolerance for being riddled with bullets upon failure.

In concept, Shadow Drifter is simple. Avoid light, get to the exit. In actual practice, however, it's a remarkably clever little game. Pushing crates around will only get you so far and is just the tip of the iceberg when it comes to sneaking around. You can use the shadows of the enemies themselves to creep along behind them, chance a dash into illumination to try to direct the fire to blast the source away, and even make use of machinery to carry things around to block shadows for you. The result is a simple little stealth game that actually explores its core concept in some creative ways to deliver a fun experience that gets its players thinking beyond "push switch, get star".

It helps that Shadow Drifter has considerably more levels than the original's eight, and each stage's design gets increasingly elaborate in that satisfying "there's a simple solution to all this madness" sort of way that only bullet-spewing deadstacle (that's deadly obstacles) course can provide. Controls are smooth, though the physics occasionally mistake anything other than slow, careful pressure for "OH, DID YOU WANT ME TO THROW THIS ACROSS THE ROOM? OKAY." at times. It's always wonderful to see developers make good on their original projects, and Shadow Drifter is relief for another reason too, since it avoids the trap of going overboard on new elements that would have overcomplicated what made the original such a joy to play. Clever, challenging, and fun for fans of stealthy action, Shadow Drifter is a great final product evolution that's a great little game to boot.

[Thanks to Peekay for sending this one in!]

I played through the first several stages and got a little frustrated at times because of the controls, but it wasn't enough to make me quit. However, when I got to the last levels, it got just plain dumb. Wonky controls should never decide the difficulty of the game. And this is coming from someone who thought the controls in Kodachrome were pretty good!

Sorry to hear you had problems, Juxta! I encountered no control issues with this game whatsoever, so I'm not sure what you mean by "wonky".

I'm not sure 'control issues' is quite the right phrase to describe it, but having just rage-quit on level twenty-whichever..

the one with the big block you have to push over to the rotating cog on the left before pressing the cyan button that releases the little blocks, which may or may not be kept in play by the big block - something over which you have no control

.. I think I know what Juxta means.

It's a great game, and I will probably calm down and go back to it..

but levels that present as unwinnable due to no fault of your own are annoying.

Of course there may be something I am missing.

"Controls" - not as in player controls (left, right, wasd, etc.), but physics controls. The review did a good job describing it, but it felt like there was a lot more "THROW THIS ACROSS THE ROOM" and less subtle nudging or "careful pressure" as you get to later levels. This probably has more to do with the fact that you don't have any time to gently nudge anything or move slowly in the last levels. That is where it seems "wonky" to me to the point that it determines the difficulty of the level.

I loved the game to start (first stage-and-a-half or so), then got just a little frustrated (but that was perfect for a high-difficulty game), then just felt like it was a "gotcha!"-type situation and stopped.

I remember playing the prototype. I'm so glad this came out, can't wait to play it. :D

Played it. On levels such as 20, it's really REALLY frustrating to play, because it shows the obvious flaws in the game.

Lots of the later levels are severely harder to play just because the game itself feels clunky, not because of human error.