Can't decide if you want to play a rhythm game or a good old fashioned dungeon crawling RPG? Now you can have both, with Iridium Studios' hybrid gem, Sequence. Originally released on the Xbox Live Arcade platform, Sequence takes a little bit of music, adds in combat, spells, weapons and items, shuffles them around in a sort of time management kind of manner, and sets it before you with a side of humor and a dose of "what the heck was that I just fought and why did it insult my mother?". 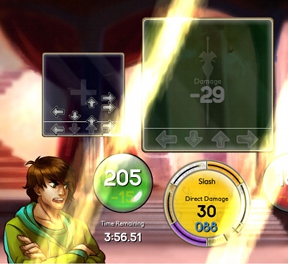 Sequence stars Ky and Naia, the former a typical young hero guy, the latter as an intercom voice giving you directions, guiding you through the game, and insulting you whenever she gets the chance. Ky is battling his way up a strange tower filled with stranger things, trapped in the pseudo-fantasy world unless he can craft keys to escape each level. Gathering the items he needs to create the keys will take some time, and earning experience to beef up his strength will take even longer. Good thing Ky's got nothing better to do!

Most of your time in Sequence will be spent in battle. But unlike most RPGs, these battles are far from static. Fights take place across three screens, each featuring independently falling arrows that appear in time with the music. In order for any of these arrows to "count", you must switch to that screen and hit the appropriate directions at the appropriate time. So, for example, to gain mana, switch to the blue screen, follow the prompts, and you'll fill your magic meter. Your foes attack on the red grid, so if arrows start falling there, switch over to stop the attack. The spell screen is where you'll complete rhythm sequences to cast the spells you activate. 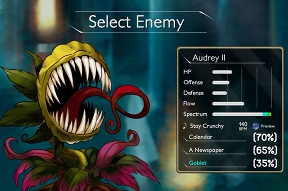 Between battles, you get to focus on inventory and items, something many players can't wait to do. In Sequence, you gain materials and items from battle and can craft them into new objects. Crafting takes place on its own screen, and in order to make something, you've got to give up something. You'll need three materials to make one item, for example, and when you go to craft, you must give up experience points to actually make the object. The more XP you give, the greater your chances of a successful craft. Don't overdo it, though, as you sorta need those stat bonuses you just gained!

There are seven floors to explore, working your way up the tower with progressively more entertaining and dangerous foes. Apart from the guardians of each level, you can choose which enemies you do battle with, giving you quite a bit of freedom in how you explore, gain items, and strengthen your character. It's basically a fight-equip-fight-grind formula, but it works so well with the rhythm elements you'll hardly notice you're fighting the same creatures over and over again. 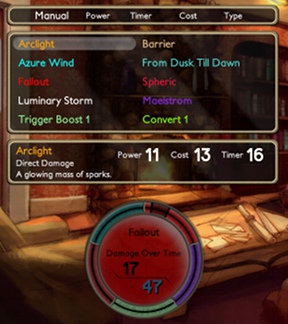 Analysis: Juggling screens, multiple rhythm arrows to hit, item management, and a snarky voice as your guide? That's about the gist of it, and it's a good gist, too! Sequence takes a big chance mixing a rhythm game with a role playing game, and the results will certainly feel different for different players. RPG fans won't quite get their fix, but neither will rhythm gamers. Casual players, on the other hand, will feel right at home, as Sequence was designed for short bursts of not-too-serious gameplay. It's easy to save, it's easy to pick up where you left off, and because you choose when and who you fight, there's no risk to setting down the controller while you take a sandwich break.

Sequence looks to hybrid grounds to conjure its "different but not too different" gameplay, but it doesn't run too deeply with either genre, something that both saves the game and prevents it from grabbing hold of a wide audience. The rhythm elements seem tenuous at times, coming across as more visual cues than aural. The music is excellent, but the integration isn't entirely complete. The same goes for the role playing elements. While they add a layer of extra intrigue, don't expect a full RPG's worth of items and character customization. Just enough to add flavoring.

Sequence will overwhelm you the first time you play, and the lengthy tutorial seems to drag on after a few minutes. Eventually you get the hang of things, though, and rapidly switching between screens to fill mana, cast spells, and defend yourself becomes automatic. Difficulty settings in the options menu allow you to customize your experience, so if you're not a rhythm gamer, don't be afraid of Sequence. It wants everybody to get along.

Go give Sequence a shot and see if a hybrid rhythm/RPG has got what it takes to get you excited about a game once again!

This is on my Steam wish list, if anyone feels generous. :P

Well, seeing as how I have an extra copy and all...

While I could play it, it was a wonderful experience.

I haven't been able to get it to work since this past monday.

I'm hoping for another hotfix.

Also, as a veteran of rhythm games of various types and difficulties, the Obnoxious difficulty is exactly as advertised.

While I definitely agree that it is pretty light on the RPG elements, I don't agree with the "tenuous rhythm elements." I have to wonder what difficulty you were playing it on John, as there seems to be plenty of rhythm in the harder difficulties. If you've ever played a rhythm game before you should know that they are almost always more visual than aural on easier difficulties. The beat of a song can't be followed very closely without making the notes too complex to follow for beginners.

For anyone that loves rhythm games, this is a great game to check out. If you just want an RPG and you're not interested in rhythm, it's probably not for you. Not due to difficulty, but just because the other gameplay elements like RPG progression and storyline are very light compared to the rhythm base they're built on.

It's really nice to see some originality though. Looking forward to more from this developer!

I didn't have very high expectancies when I got this during the Steam Christmas sale, but it surprised me in every possible way. Not only is the gameplay great, but the story behind the Tower and its inahbitants is also incredibly clever. The voice acting, too, is spot-on (though I wish they didn't break off sentences so often). Heck, even the ending credits are interesting.

All in all, this game is just awesome. If you ever find yourself wondering whether or not to invest your hard-earned five bucks into this, well, DO IT. You won't regret it =)