Sentry Knight is a defensive shooter like Elona Shooter, only almost aggressively adorable... and significantly shorter. As a lone knight with a bow and arrow in a tower, your job is to hold the line on each stage against the cuddly-wuddly invading forces of darkness. Our hero automatically fires his bow wherever the cursor is, so just use the mouse to aim and he'll take care of the rest. Destroying enemies grants gold to spend on upgrades at the blacksmith, but also experience points towards leveling up, which earns points you can spend on a variety of skills, enhancements, and even devastating spells. You can go back and replay levels to grind for more levels and gold... and you'll probably need to. Sentry Knight's main drawback, in fact, is that it's so short, and that means it feels like the difficulty spikes significantly at level three instead of maintaining a steady slope. The game has such a substantial amount of skills at its disposal, with three hefty skill/spell trees, that it would have been nice to have more time to use and unlock them, rather than feel like you were being forced to grind so quickly. 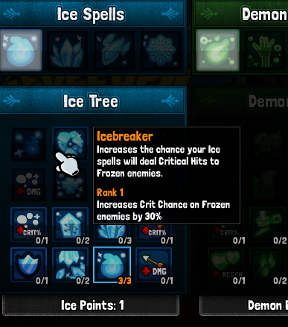 With about twice as many levels, Sentry Knight would be absolutely stellar instead of grindy, but good. The design is absolutely fantastic, sporting a wide variety of enemies and abilities, and the gameplay is perfect for casual breaks. If it were spread out a bit more and a bit more forgiving, even if simply by allowing you to keep gold and experience if you die, or relying a bit less on swarming you with tons of smaller enemies around one massively powerful one. I like Sentry Knight. Maybe not as much as I could, but I do. It's charming, simple, and addictive. If you don't have the patience for grinding, you're going to have to sigh and bid a tearful farewell with waving hanky on the docks of What Might Have Been, but if you like a challenge and repeatedly shooting things in the face for gold, this one might just be for you.

Agreed, Dora. This game has SO much potential and I love so many aspects of it, but it could really benefit from more levels and/or the ability to keep $$ and XP from levels lost. Would love to see this updated by the developer in the future...

Hey! I'm the programmer behind Sentry Knight and I wanted to hank you for taking the time to review the game! We're getting such great feedback from everyone and we're happy people seem to be receptive to the game! With that said, it seems you guys still have an older version of the game uploaded!

I've been keeping tabs on Kongregate reviews and feedback and consistently updating our builds over there as well as Newgrounds. Looks like your review was based on an older version of the game, prior to the first major update we pushed! A lot of the issues people were vocal about were fixed! You can check the changelog with all the updates here: http://jwolfgames.com/changelog.txt

I'd like to send you guys the latest build so people over here can play the proper build instead of having to go to Kongregate or Newgrounds to do so! Please email me at [email protected] (yeah, I know...) and I can send you a new SWF with the latest content and updates!

Thanks again for the kind words! We appreciate it!

the changes justin wolf mentioned really do make the game play much better.

The only alteration I still wish to see is a method of stopping the arrow firing. For instance, maybe clicking could stop the firing. This opens up strategies like "hold your shot ready until you see something to shoot at", or more importantly "don't shoot the sheep you are trying to cast a spell behind". Its not a big deal, and by later levels there is so much going on its not useful, but being able to exhibit a bit more finesse at the early levels would be appreciated.

I have contacted the developer for the new version and am waiting to upload it. :) I will update the review as soon as we have it and I've played it.

Oh .. my ... god .. if there's something I hate is that suddenly my progress is gone ?!? And I especially hate it when I love the game I was playing! I didn't delete my cookies or changed anything else.

Dora is it something to do with an update ?
Did the file name change or something ?

Hey guys! The first update I ever did to Sentry Knight (approximately 4 or so days ago) required me to wipe everyone's data because I revamped the saving and loading system. So since you were playing the very first build of the game (pre-update) you unfortunately had your data wiped. All updates since then and all future updates will not require any data wipes. Apologies for that. Hope you guys have fun! Kongregate/Newgrounds will always have the latest builds for you to play, by the way!

Well, thanks for the explanation Justin, doesn't cut it for me though. Even though I really loved the game, I don't feel like doing 5 worlds and all my plugins etc all over again, sorry. A shame though, because I really wanted to finish it.

Wouldn't a conversion have been better?

Lol, did I really say plugins there? I meant upgrades, addons, powerups, something like that ;-) Still haven't played it anymore btw... but, to be fair, I'm starting to feel like playing again, because it was bloody fun!

Heh, although I think after a few days noone reads this anymore, still want to report that I finished the game and I absolutely loved it :-) Happy that I decided to re-do my first progress. It's still very nice to play, even a second time!

Oh, and I loved the music as well, that worked very good in combination with the game.

Also found a bug, I think, the 'Killing machine' medal doesn't work. I didn't count them, but I cannot imagine I have NOT killed over a 100 enemies ;-)

Hehe Jeff, thanks for the confirmation ;-) I just have / had the idea that after a few days not much happens anymore in the comment thread.

However, that might just be a misperception. Almost at all medals for the game btw... ;-)

Hello everybody! I really like the game. What can I do about that "Live together, Die alone" medal, though? I finished the game, and apparently I was killed six or seven times (more than I counted). And to get the medal I need to finish the game with 5 or less deaths.

Is there any way to repeat a level where I died too often, to "correct" the mistake?