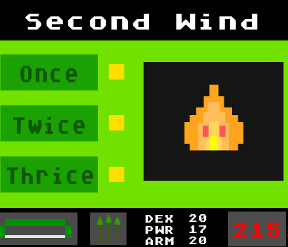 Mixing humour with classic dungeon-crawling adventure and a liberal sprinkling of roguelike RPG flair, Squidly's Second Wind is snarky, silly, strange, and actually kind of awesome. Choose a class and descend into a dungeon packed with weirdness, from angry newts that can only be appeased by a magical flute to lazy mimics and political orcs. The game randomly chooses events to present you with as you play, and they can be anything from enemies that will play out turn-based style and reward you with experience and gold, or deities who will bless you for some gold, opportunistic potion sellers, blacksmiths, challenges, and more. Though initially you only have five classes available, successfully completing certain events can unlock even more until you have twenty different classes to choose from. If you die, it's game over... but as you might guess from the title, you'll have one more shot at glory. Before you die. Again. Look, it's a roguelike. You knew what you were getting into. You can't save manually, but if you leave the game and come back to it later, it will give you the option of resuming your character from wherever you were when you last played. 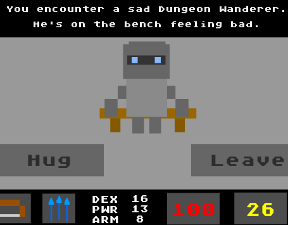 If you're not a fan of roguelikes, then permadeath, even with the second chance, will be a nail in the coffin. Similarly, being unable to see your inventory so you can keep track of potions and items is annoying. As is the fact that the amount of health randomly restored when drinking said potions can vary drastically. I get the feeling that this might be because some of the Infirmaries you can buy potions from are better than others, but it's hard to tell since the game treats all potions the same, and, again, you can't look at an inventory to see you just bought a "Potion of Stanky Lameness" or something. Which in my case apparently happened a lot. For that matter, so did going missing attacks and clicking through endless repeated encounters before I finally found the single one I needed to progress. It's the sort of thing you expect with any game that uses a random generator, but it still rankles, and makes you feel like the game often comes down to blind luck.

Fortunately, Second Wind has a very Kingdom of Loathing-esque vibe to its tongue-in-cheek style and writing, which is never a bad thing, though it does clash somewhat with the serious tone the end encounters take. This is where the game's breezy "aw, c'mon, just one more try" addictiveness really shines through, and since the different classes have a surprising amount of variety and strategy in their strengths and abilities, it takes some of the sting out of starting all over. There's just so much to see and encounter, and with four possible endings, some better than others, you'll have to experiment a lot, and probably die a lot, if you want to see all of it. Though heavily reliant on luck and patience, Second Wind is a witty and addictive retro dungeon crawler you can spend five minutes or an hour on without really realising it.

ChairmanMUHC; you use potions during battle only by clicking on the "Pot" button.

The loading/credit pages at the start of this game (and every time you die and want to restart) are a gorram nightmare.

@ThenAgain: If you press that Send Score thing and click through, then you don't have to go through the opening credits.

... I think I'm just REALLY bad at this game, even though I generally don't mind (in fact, kinda like) rougelikes.

I can't believe that I'm doing this, but any one got a favorite class/strategy? I realize that this is a game where luck and nothing but luck is the only real determining factor, but I can't even seem to get past level 7 on Easy mode. So... yeah.

Espers, natch. I got all the way to the end with that one and no other (as well as unlocked a lot of characters along the way).

I agree, while it may be fun a few times, but then I hit a wall where it seems like no matter how good I get I get a string of misses, cost of weapon upgrade is too high, really tough character, ect. It just not fun trying to get a good setup, but nothing can guide you. I also can't get past the first section. Good game, but Dora is right it really seems that you have to rely on luck too much.

My best run with the original available characters was using a rogue, whose 2nd ability allowed me to blaze through enemies quite easily through out the game. The 3rd ability was a great supplement to the 2nd.

Unlock the bard and then pump up dexterity. Then, at the beginning of each battle, use storms, and nobody will be able to hit you.

I used a Monk, and my strategy was to always use the 3rd power-up ability at the very beginning of my turn, and then hit the enemy with another ability. I upgraded my weapon and armor as often as possible, and mostly eschewed favors from the gods. I did die several times along the way (admittedly because I wasn't paying attention to my HP), but because it saves your progress after you enter a new world, I was able to start from my saved games and get all the way to the end.

How can you legitimately defeat all five deities?

Love the fact that you guys put in the effort to write an article about this!

As for the luck - there's always gonna be luck in any roguelike, but if you play it enough it becomes more of a hurdle you can overcome.

It took me FOREVER to first beat this game, mostly cause' I didn't have an ending, but case and point - I can blaze through this game every time I play it, reach the end with any class.

Honestly, luck only factors in the first segment a bit, after that it's just planning ahead :D

Looking for a strategy guide? While I don't go into specifics, here are some tips I hope can help your quest: