Based on the entries of the SCP Foundation Wiki, SCP - Containment Breach from Joonas Rikkonen and a group of talented 3D modelers and musicians, is one of those games that makes you go "eeeeee" in increasing pitch and intensity as nerves take hold. This free indie horror adventure turns you into a disposable Class D grunt, essentially a human guinea pig, who along with a few other poor saps is today working with SCP-173, an animate and highly aggressive construct that can only move when not in a direct line of sight. So, you know, already not a good day for you, but it's about to get a lot worse when the facility suddenly comes under attack by an unknown enemy and the lights go out... and the locks open. Suddenly alone in the dark and pursued through the maze-like complex by SCP-173 and other creatures, escape seems hard enough, but is just staying alive going to prove a nigh-impossible task? (Spoiler: Probably.) 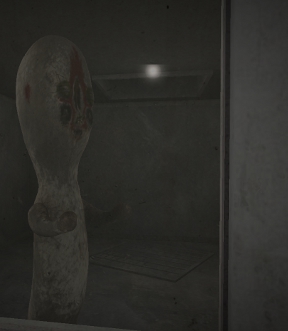 Move with the [WASD] or [arrow] keys, and look around and interact with the mouse. If you're playing with saves enabled, hit [F5] to save whenever you like. [TAB] opens your inventory, and [shift] allows you to sprint, but arguably the most important function of all? The [spacebar], which makes you blink. See, your character needs to blink every so often as indicated by the "blink bar" in the lower left corner, and since blinking breaks your line of sight with SCP-173, thus allowing it to move, you'll want to try to time and manually manage your blinks in order to survive. Certain environmental effects, like smoke or gas, will irritate your eyes and force you to blink more, so watch out for gas masks to wear or keep eyedrops on hand.

Of course, SCP-173 is hardly the only threat you'll encounter. Other unknown and deadly entities are roaming the halls, and not everybody wants to see you make it out safely. You'll need to track down keycards, clues as to what's going on, and be quick and resourceful to make it out. And, you know, avoid being drawing into a hellish pocket dimension by another relentless pursuer. Or getting gunned down. Or just giving in to the urge to hide blubbering in the women's washroom until that grinding noise becomes unbearable. Oh, and if you're thinking about memorizing the layout of the game so you can sprint through it after a few snapped necks, don't bother... the map is randomised every time, ensuring there's plenty of pulverized vertebrae for ages to come. 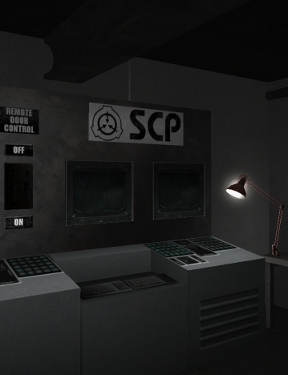 Analysis: If there was ever a concept that was more perfect for a first-person adventure game like this, it's hard to imagine it. The SCP is packed with so many great ideas and to see even a fraction of them implemented here is a real thrill. You don't even need to be familiar with all their original origins (after all, a lowly D-Class grunt wouldn't be), since it adds considerably to the fear and sense of disorientation. Some of the creatures you'll encounter are exceptionally creepy and otherworldly. Though a lot of the textures are fairly simplistic and some of the area designs are bland, Containment Breach uses lighting and sound to create a brilliantly tense and oppressive atmosphere that will have you dreading every corner and closed door. And the voice acting? Surprisingly good across the board! Way to communicate pain and suffering, you guys!

Blinking becomes mildly annoying visually when the game is already so dark, and you're one of those people who immediately wants to know why you can't just blink one eye at a time. The bigger annoyance, however, is that SCP-173 can be almost too unpredictable, sometimes appearing immediately behind you for an insta-kill upon loading saves, or even seeming to teleport or appear in places it shouldn't have been able to access based on previous positioning. It makes planning and strategy feel less reliable than it needs to be, so luck in regards to map generation feels like it's a big factor. It is, of course, worth mentioning that this is not the game's final version, and it continues to be updated with more content, fixes, and even additional endings. It's clear the development team is investing a lot of time and talent into turning this into the game they and their fans want it to be.

Though not perfect and still a little buggy, SCP - Containment Breach has some serious moments of inarticulate, squealing terror. From frantic chases down darkened corridors to that sinking sensation you get in your stomach when you hear that grinding noise coming from somewhere close by, it's full of the stuff of nightmares, and we wouldn't have it any other way.

Clearly SCP-173 is the predecessor of the Weeping Angels.

Anyone else experiencing slower than dialup download speeds from their server? Fastest I can get is ~11KB/sec

Okay, I tried starting this game and it jacked up my video card such that I had to do a hard reboot on my PC. Not gonna try again.

My anti-virus software flags www.scpcbgame.com as unsafe. With a big red shield with a cross through it to nail the point home...

"This website has been reported to contain the following threats:

Malicious software threat: This site contains links to viruses or other software programs that can reveal personal information stored or typed on your computer to malicious persons."

Is it just me? I see other people haven't had a problem.

I think it's just your anti-virus throwing a false positive. I trust Google, having experienced actual malware threats previously on my own site and Google has always been quick to notice it and report it to me and to others who may try to visit.

Downloaded Game tonight and works beautify. It downloaded in seconds and ran immediately. Best part is im using full screen 1920×1080 and my grapics card is broken, so this is running off what ever defult grapics card is on my dell xps8000. Bottom Line Game Works GREAT!!!👍