Samurai Shodown II isn't a game you'd expect to see on a mobile device. Virtual controls for a fighting game originally released 20 years ago? Doesn't sound like the most promising combination. But publisher DotEmu has gone to great lengths to make things work, handing you completely customizable button layouts and sizes as well as built-in MOGA controller support so you play without hindrance. A slidey touch screen may not have the give of a good arcade joystick, but it gets the job done! 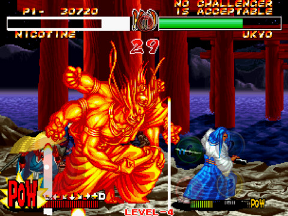 Like most fighting games from the 90s, Samurai Shodown II gives you a roster of warriors to choose from and pushes you into in a series of one on one battles. Each character has his or her own storyline that plays out, coming to a conclusion only after you defeat the final boss. With 15 characters to choose from, variety or gameplay length definitely isn't an issue, especially if you're the kind of player that likes to build your skills and master a game. Multiplayer is available via bluetooth, so if you've got a friend nearby who wants to get smacked in the face with Gen-An's knife glove, there's totally an app for that.

You'll miss physical buttons when playing Samurai Shodown II on your iOS device, for sure, but this set-up really is the next best thing. You can place the virtual joystick and virtual buttons anywhere on the screen, scale them, even switch between six button and the more traditional four button layout. The new casual mode makes it easy for new players to join, adding a dedicated button for special moves! The game itself is masterfully ported, runs smoothly, has tons of configuration options, and is just as epic as it was two decades ago. Nostalgia will probably drive more players to Samurai Shodown II more than anything, but anyone who wants a solid portable fighting game should seriously consider it.