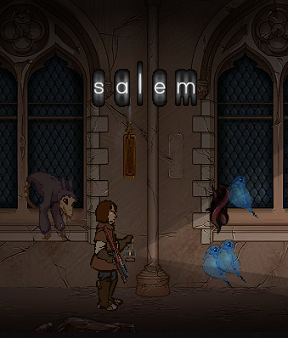 What is a man? Well, if the man is Anselm, then he is an apprentice Demon Hunter, sent by the Divine Order to cleanse the city of Salem. The prophecies have foretold of terrible calamity that will condemn mankind, if not for the intervention of a good man; a man of faith; a man with an infernally snarky sidekick and a bad-ass crossbow. Good thing that's you Anselm, because you're all we have left. Salem is a horror platform adventure by Mar-Ble Team, where light and darkness clash, and it's nothing less than Armageddon.

Move Anselm with [WASD], and aim and fire your demon-slaying crossbow with the mouse. Demons are wily creatures, though, so to get a proper bead on them, you'll have to use your stun lantern. Hold the [spacebar], and all demons near your aim-cursor will be marked. This will stun most types, though different demons react in different ways. Be sure to keep track of the lantern energy you use. It can be recharged by slaying demons, or standing within a light source, but you really don't want to be caught in a dark place without it. There are creatures far worse than grues in this town... With Castlevania-styled gothic atmosphere, creative creature designs, and just the right touch of humorous dialogue with unintentionally hilarious voice-acting, Salem is an early-Halloween treat. Though the "holding down a key and move the mouse" mechanics are a little unintuitive (and not very trackpad friendly at the least), Salem's brisk pace and twisty plot make it a demon-hunt everyone should join in on.

Controls are wonky, but I'll try to lower my quality settings and see if that improves things. Right now, however, I'm stuck in the first room that has some sort of a closing door. It opens when I enter the room, then closes when I get to the top of the staircase, and I'm not sure what I'm supposed to do here. The zombie below me is of no help.

You have to stun the zombie below you at the right spot in order to keep the door open. I didn't really pay attention to the fact that you have to aim your lamp to stun them directly.

Wow, these controls suck. Neat looking game, and I'm happy with the voice acting, but the hesitations, the fact that you can't turn around quickly, the fact that Anselm seems to only fire when he feels like it, the fact that sometimes you can fire behind you and other times you have to stop moving, turn around, wait for Anselm to decide that you mean he should turn around, and THEN fire... This blows. A demon hunter should move like a cat, not like a stranded walrus.

I can't get past

the first room with the demon... I get what I'm supposed to do (stun it and then shoot it) but the delayed response of the controls means I'm either getting hit with the bloody arrows (what are those things?) or by the random spikes coming up through the floor... I just gave up, not worth the aggravation.

Also, Alan Wake called, he wants his "hit the baddies with light, then shoot them" concept back.

Okay, now I can't pass the first demon. I've depleted his power meter, but he won't go away. My lantern now has a diablo looking shape to it, and when I light him up I see some pentagram looking thing, but what am I supposed to do? This game really ain't that great, but there's not a lot of other options today!

When you get the first demon's health down to nothing and you get that red glowing thing show up on your character, you have to hit space and then a big graphic shows up. On that graphic you have to trace a pentagram before your lantern power runs out. It gives you feedback as you trace it, so you know you are doing it right. Hope that helps.

I really, really wanted to like this game -- the graphics are gorgeous, the voice acting and sound effects are fantastic...but the developers got so caught up in making a visually and audibly amazing game that they forgot about basic game mechanics.

Even with the quality turned down to the lowest quality (which is a crying shame, because the dynamic quality is beautiful) the character is still so sluggish and slow that he can't outrun or evade the first demon's projectiles.

Even worse is the pentagram thing, which is not only not intuitive, but not explained or even hinted at.

It's a pity - so much potential, wasted by such awful controls.

Finally beat this game, but it wasn't without a lot of frustration with the aforementioned sluggish game controls. Based on the ending it sounds like there will be more like this coming, but I only hope they improve the controls to make this a truly great game.

I gave up on the game on the demon with multiple eyes that shoot at you while zombies wander towards you as well. Just stopped being fun.

Uggh, what I assume is the final boss is nigh impossible due to me

running out of lantern juice before I can finish whatever the pentagram thing is. And it's not like I can do part of it and resume it, no I have to do it in one shot. AND said final boss seems to sap my lantern energy.

@Kgummy: It took me awhile, too, but here's what you do:

Wait until the tentacles to the far left and right of the screen glow, then use your lantern (if I remember correctly). The small spirits from previous levels will appear, slay them as usual. You can do this repeatedly to gain lantern power. The brighter the tentacles are glowing, the more spirits will appear. Just keep your lantern as bright as possible so you have plenty of time to make the seal.

To make beating that boss a lot easier, stand by the glowing ball on the bottom shelf of the second bookcase (the one closest to the demon wall). You'll get easy lantern recharges, & as long as you pay attention the boss can't hit you with its eye lasers while you're standing there. Just keep weakening its eyes with the lantern & shooting them with the crossbow, & you'll have this one all wrapped up with a bow.

the zombies can still reach you on that shelf, & you still have to beat the boss before its central eye opens up all the way & shoots its hyper-death ray,

so stay on your toes.

It looks like what I was having trouble with was

just at auto adjust for quality, as soon as the lantern got to the second 'round', it lagged really badly. Once I turned the quality to low, it was much easier. Now if only there was a way to skip past the credits fast, if only for new game +.

Okay, I still really liked the look and feel, so I went back and played again -- made it to the big ugly boss.

Imagine my surprise (and chagrin) when I kept mashing the button one way or another, only to have the character run right into the boss.

Please repost this when the developers get the mechanics figured out.

Game was really fun, and on this site, i played it for 3th time. Can't wait for a sequel. And a harder one, because this one was too easy :D I don't get it while other complain about the controls. They were fine. Bosses were easy, not so hard as everyone says, but the ending is too long.

The controls are great, but yeah some of the comments are right, the character is too slow. The controls must be much harder, and the char should be much more jumpy and faster.

From the graphics, story and voice acting, I have to admit that this has got to be an excellently made game. Visually that is.
The game controls were a little hard to get used to. It almost makes me want to jump most of the time whenever Anselm has to reload for a little long time (Or maybe my computer's just laggy enough to make it playable for me).

But hey, that was a great play. I seriously love the voice acting though, it was nearly perfect. Especially Zipp's voice acting.

I'm stuck on level 2 with the door. I stunned the possessed demon, then went to the door...which refused to open.

Ah, got it. Bah, the eye demon is tricky. I didn't notice the timer signifier. Also, when it came time for the seal, my mouse was jumping all over the place and I barely got halfway through the seal.

Does anyone know what the different dialogue options do? I asked "Who are you, really?"