Sakura Quick Math from Shiny Things sounds like it's one step away from being an extended homework assignment. But thanks to its stylish and simple design, it turns into a brain teaser that's way more fun than you might expect, and it might just make you a little faster at basic arithmetic! 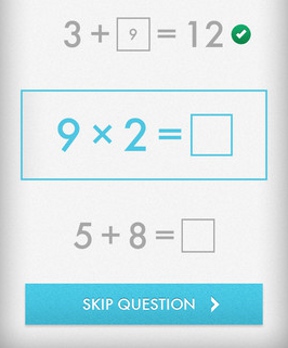 To play, all you need to do is perform basic calculations. Quickly. By choosing from addition, subtraction, multiplication, division, or mixed modes, you are presented with a series of problems with one of the factors missing. As quickly as you can, draw the missing number on the screen. As soon as you get it right, you'll move on to the next problem. The goal is to be as accurate and as speedy as you can. The game tracks your scores on a chart, allowing you to watch your times to make sure all that TV and cake isn't actually rotting your brain.

For such a basic concept, Quick Math makes itself surprisingly fun. Each mode has three difficulty levels you choose each time you play, so if you aren't in the mood to actually strain your synapses, by all means, don't! The only drawback is the handwriting recognition. As with any program that allows you to draw characters, it doesn't always get it right, resulting in a few errors along the way. Nothing too major, of course, but when you're trying to prove how awesome you are, every second counts.

Quick Math is a simple but enjoyable brain workout that looks both modern and stylish. Try it for the mental boost, but stick with it to prove your third grade teacher she was wrong to say you were a little "behind" in mathematics.