So here you are, ruling the world with your evil fire powers, being worshiped by the worthless, and ever enjoying your juicy sacrificial cows, when suddenly one of those peons comes to inform you that they are not going to give you any more sacrifices. Something about a famine, and starving to death and bla bla bla. Psh, mortals. This is a troubling matter however, but being the god of fire and lightning you have your solutions. Entertainment Forge, the same wonderful duo that brought us Epic Boss Fighter now brings us Sacrifire! Using your undead minions you must collect the cows being guarded by your previous zealots. It's a game of skill and timing and strategy, as you must chose what minions to use in the battle against, or narrowly miss being slaughtered by, the guards. 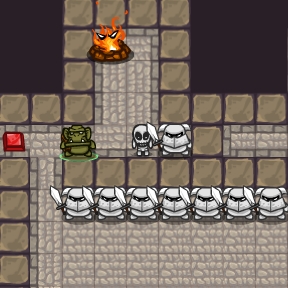 At the start of each level you must chose what minions you wish to use as each one has their specialties. It's a shame they can't fight back against the guards so dodging is a major part of the game play. You'll always need the orc, who is the only one that can carry your needed cows. Other minions can block shots or kill an enemy unit. Most levels have variations on how to succeed, making it a pretty good mix of puzzles and timing. Not a perfect mix, as some levels you have to be quick with your fingers over having to think out any kind of solution, but still a decent one. There are some other minor issues like stepping from one button to the other won't set the second one off and walking over a guard with a skeleton makes him pass through you instead of having him rebound off of the bones like he is supposed to. Neither of these are major and won't really effect gameplay if you're just aware. Sacrifire is still as clever and enjoyable as ever with some great bits of humor (especially at the end). Keep your fires burning hot and your minions on your toes and go collect those cows!

The vampire goes *NOM* *NOM* on the knights. Hooray!
The only really tricky thing is making sure the kamikaze guy doesn't accidentally take out the wrong target. If so, it is a level restarter.