rymdkapsel is a mesmerizing defense game from Martin Jonasson (grapefrukt) that is as elegant as it is intriguing. It combines elements of spatial awareness, strategic planning, Civilization-like expansion, and a touch of zen-like exploration as you work your way further into outer space, discovering ability upgrades while defending yourself from attack. It's a beautifully balanced game that has the ability to hold your attention for hours on end. 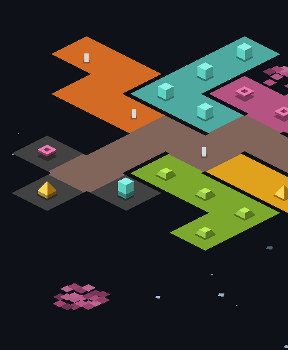 The basic idea behind rymdkapsel is to build a functional base and expand to new chunks of land. Monoliths are waiting to be decoded, granting you ability boosts that will help you survive the waves of enemy attacks that occur at regular intervals. You have a small group of minions who follow your every order, carrying resources around and building the structures you've laid out. It starts with a few pieces of corridor, the most basic component that forms passageways to the rest of your facilities. As long as you've got enough resources, the minions will take care of the rest. It's simply a matter of making sure your base is balanced and fully functional so you can survive in the long-run.

Generating and maintaining resources is a key aspect of rymdkapsel's gameplay. Not only do you have to take quantity into consideration, but larger bases need more convenient resource generators, otherwise you'll waste your time waiting for minions to walk back and forth. Extractors and reactors create resources at regular intervals, while gardens and kitchens work together to generate food. Weapons rooms serve as defense points for your minions to staff and take on incoming enemies. These become much more important as your base increases in size, as those handheld lasers have a limited range. You wouldn't want your workers fried to a crisp while strolling down an empty corridor, would you? 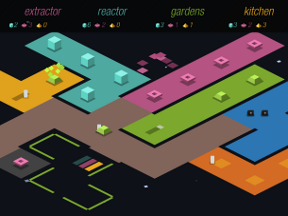 Analysis: Everything about rymdkapsel is as refined and minimalistic as can be. Starting with the visual presentation, you work with little more than basic single-color geometric shapes, piecing them together one block at a time. The tetromino-style building shapes add an element of unpredictability to construction projects. Each time you drag a new piece down it appears in one of several shapes. You can't change the shape, you just have to work with it. There's no such thing as the "wrong" shape, as they all get built in the same manner. But when you get that perfect piece there's a brief moment of pure elation. Just like when the Tetris gods grant you a lucrative I block. There's no real risk or failure involved, just pure reward.

The interface deserves great applause, as it quite neatly ditches some of the more complex control mechanics from strategy and defense games in favor of a streamlined touch interface. Even without direct control over your minions you'll find they do almost precisely what you want. They don't waste steps, they don't make stupid decisions. They're so well programmed you can almost see them thinking about their next move.

The most dangerous thing about rymdkapsel is that you won't be able to stop playing. Aside from the gameplay itself, there's this subtle sense of mystery that keeps pressing you forward. It's easy to compare it to Virtual Villagers or, to a greater extent, 2001: A Space Odyssey. And not just because there are monoliths hanging around outer space. Awe and wonder keep you playing just as much as a desire to outlive/defeat those flying enemy comet thingies.

There's no downside to rymdkapsel. It's all wonderfully simple but endlessly inventive. You'll be completely transfixed by this game.

This looks cool--wish they had a Lite version for us cheapskates who like to try before we buy.

Personally, I would have to try first because, based on past experience with Android games, there's a good chance that it flat out wouldn't work. As it is, I simply can't play this game, because I don't find it a risk worth taking on something that costs money.

Yes, those two points above about price are most certainly valid.

HOWEVER... the game is very very good although it is a bit of a shock that something that expensive doesn't have elements that would re-inforce the apparently simple 'game' for instance giving you the ability to look back over past campaigns and analyse your choices.

There are a couple of other niggling things too like the fact that it is all too easy to reset a game (no 'are you sure' button) and a sense that the path finding is sometimes frustrating (but that's life in someways).

But if you can afford to take a punt on it it is a very well crafted game and having been playing it for a few days very very satisfying and extremely more-ish.

My recommendation - absolutely worth the punt.

Google Play has a refund feature, fyi. It's available for 15 minutes after you buy a game.
Not hidden either - I'm pretty sure it automatically refunds purchases if you delete an app within 15 minutes, but it's also directly available if you go to the app's page on Google play.