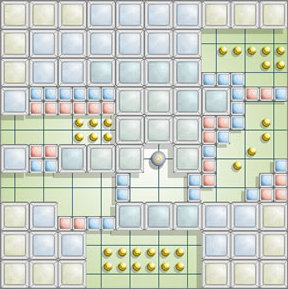 Do you remember Prachka (Orbox) from a couple of months ago? The author, Arseniy Desrosiers from Russia, has been busy creating a couple of new Flash games since then.

The first is called Rumble Ball, and it is a strategy game of sorts. The object is to score the most points you can by hitting colored items on the play field with a large ball. The ball will roll over small yellow items and bounce off colored cubes. The more you hit at once with each roll of the ball, the more points you will score. For example, the first item hit is worth 10 points, the next worth 20, the next 30, and so on. Once the ball comes to a stop, the item points reset to 10.

Similar to hitting a pool ball with a cue stick, the method of control in this game is similar, except there there is no way to influence how fast the ball initially travels. There is also no limit to the number of times you may hit the ball, allowing you to take as many or as few hits as you wish. The highest scores for this game will be from those who make every shot count, and for as large a score as possible.

Analysis: I was immediately drawn to this game due to its very pretty presentation. The appealing graphics and top-down, pseudo-3D appearance make this game compelling for most anyone to pick up and play. The interface is intuitive, and Rublion did a nice job of creating an animated cursor that positions itself appropriately, thus making every shot feel natual and easy. The sounds emitted when the ball bounces off objects, and especially when getting combos, adds to the excitement and novelty of the game.

The game itself has much potential, much more than I believe Rubilon realized in its first iteration. For example, he might have provided a limit to the number of times a player may hit the ball, paired with the ability to hit the ball with variable power. Because I was unable to give the ball more power, the game seemed to drag for me the more I played. Also, the play fields were a bit too complex too early in the game. He might have improved the strategic element in the game by creating fields that were quite sparse to start with, and then adding complexity as the player improved.

Still, Rumble Ball is an enjoyable good-looking game that can be played either by mindlessly hitting the ball until the field is cleared, or playing for a high score where every shot counts.

Kipling - you need the latest Flash player installed. Click the icon down the left side of the main page that says "Get Flash". That will take you to a page where you can download and install what you need to open SWFs, the multimedia file created by Flash.

Well it's a good game... a good start anyway. You're right Jay, it does seem to need a little more. I played it two times, one just basicly bashing the ball around, and again being a bit more careful and strategic. I got a lower score the second time. So there doesnt seem to be a learning curve. It's a shame because the physics and look and sound of the thing are great. But it doesnt have the staying power. I got more hooked on the other game of his, there was some strategy involved. If this one had some kind of danger - as well as some variable or incentive it would be a corker...
Now, who's going to translate our constructive criticism into russian in the hope that the guy makes a Rumble Ball v2 ? It would be a winner!

I like this idea of having a section for your analysis of the game. I have an interest in game design, and it's interesting to have someone else's take on why a game works, why something is or isn't effective, etc. It's also nice sometimes to see your reasons for choosing a given game, since once in a while you'll post something that I think is bad or boring (like Survivoo), and I'd like to know what you thought was so interesting about it.

Thanks, ACLS. I appreciate the feedback. I've added a response to your question about Survivoo in the comments to that game. =)

Rubilon has a second version or level of this game at his web site. He's added a few new touches. Worth checking out.

Theres a 4th version of this game... it fixes the glitch of version 3 that the mouse would "stick" sometimes... also the controls seem to be easier. [link]
woot... i really think they read this blog cuz they made all the changes according to comments posted here (needs to be danger - bombs. needs to be able to change velocity - check. wow... i love this site even more now...!)

it's too bad you aren't supposed to hit the bombs...

they are SO much fun to hit!

Jay, or whatever admin reads this. This game appears to be gone. None of the links work, they all come up as 404 Not Found. A bit sad because this was one of the games I found myself coming back to again and again.

Thanks for the note. I've just hosted all 4 games and updated the review with the new links. LET'S GET READY TO RUMBLE!! (sorry, couldn't resist).