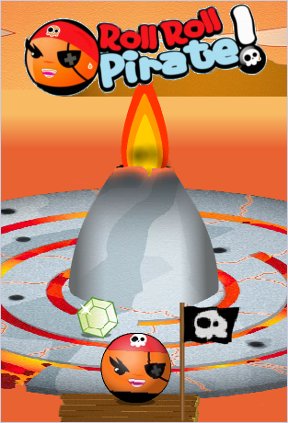 After a lucrative time spent looting, pillaging, and in general terrorizing the seven seas, Roll Pirate points his ship homeward bound with enough treasure to make a king jealous. All is well until an unfortunate fire breaks out in the powder room and the resulting explosion scatters Roll Pirate's treasure across the surrounding islands. In Roll Roll Pirate, an interesting new action game from Devilish Games, you help Roll Pirate get his treasure back safe and sound.

To win back the pirate's booty, you'll have to travel to each of the surrounding islands, guide Roll Pirate to the loot, and see him safely back to the raft so he can move on to the next island. [Kyle, do the pirate voice. -Ed.] No. This is easier said than done, though, for the islands are filled with treacherously winding paths that are laden with perilous traps.

Control Roll Pirate using the [arrow] keys. [Up] and [down] move Roll Pirate away or towards you, while [left] and [right] move him in their respective directions, matching the curvature of the island. Alternatively, you can think of [left] and [right] as rotating the entire playing field while Roll remains still. [Seriously. Do the pirate voice. -Ed.] I don't want to. I did it last month. Anyway, the controls sound more complex than they really are. It shouldn't take you too long to acclimate yourself.

Roll Roll Pirate is innovative, with unique gameplay that is reminiscent of, but thankfully simpler and more intuitive than, Monkeyball and similar games. Smooth animation and solid visuals, combined with the gameplay, go a long way to boost Roll Roll Pirate's appeal. Unfortunately, the total package is not without flaw. The level design seems... [Yarrrrg, me matey! -Ed.] ...trying to be a professional here, man... the level design seems counterintuitive to the speed, momentum, and feel of Roll Pirate, and the camera angles you have to deal with can sometimes get in the way. One gets the feeling that Roll Roll Pirate should be a far more dynamic game, and much of the time it feels like you're playing with most of your potential on a short leash. But... [Look, do the pirate voice or we publish your Ibiza vacation photos. -Ed.] You wouldn't. [You heard me. -Ed.] Ugh. Fine.

Thanks for sending this one in, David!

Me thinks that thar pirate is A-hGrrrrrl.

Yes, with that lipstick, mascara, and eyeliner that thar pirate is either a girl...or Johnny Depp.

An ad on the page reloaded the page while I was in mid-level, forcing me to restart. That's pretty much unforgiveable, especially in a game that I was already annoyed at for forcing you to negotiate the same obstacles twice per level.

They call Roll Pirate a him in the introduction. I guess it's Johnny Depp. He should get a new personal trainer.

This game feels like a chore rather than a game. This is not a good thing.

I played it for a bit but I don't see where the fun part comes in. It's like the video game equivalent of washing dishes. You go just go through the dull, repetitive motions until the job is done. At least when you are washing dishes if you make one error the plate doesn't get re-coated with dirt.

xy, I didn't even make it past the opening ad. I just closed the tab as soon as the blaring noise assaulted my senses. I'm glad to know I spared myself further nausea.

I also don't see the fun. Maybe the later levels get more interesting(I played ~8), but the initial levels don't give you much hope for the future. And the controls are just odd - it is like you are rotating the playing field, which is a good thing in some games, but not here, where moving should be the goal the whole time. It feel like the developer was learning to play with perspective, and made a game around it.

Using polar coordinates instead of Cartesian is somewhat original (i.e. moving with constant angle or radius, instead of constant x or y). However, as others have said the game is tedious, repetitive and not sufficiently entertaining. There's no desire to persevere so as to discover what's on the next level, because you know it will just be more of the same but more difficult.

ow! The controls!!!! A good game struggling to come out from the problems that pepper the game.

Initially the controls seemed counter-intuitive but I got the hang of it up until a restart five levels in that took far too long for the payback.

Generally there was something quite likeable about it but frustration turned me off.

It takes a rather long time to restart a level, and the levels are not so interesting to begin with. Nice concept, but rather dull execution.

The game was quite good in the original levels with the 1.5D controls, but in later levels, the orientation was a bit off making it hard to move paralell to some enemies which made white and deaht, that's also a typo in the game, extremely difficult, both taking around 20 tries each. The last level was also tedious as it just required repetition once u knew the pattern. The isometricness of the game while being completely 3D, or 1.5D as I said earlier, made it hard to tell where objects where and weren't such as you could go through the very edges of some of them. All in all, it promised a lot with the 1.5D, which is original, but the creator did not follow through with the charm of the game resulting in a game built on repetition.