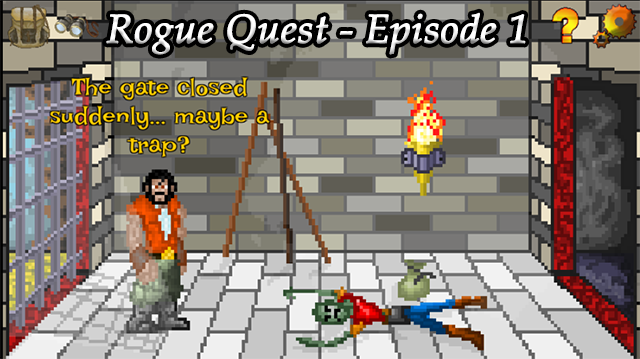 Are you ready for a treasure hunt? I sure hope so, because ExperaGameS has prepared a pixel adventure game for you. After less than ideal navigation of messy swamps and barely escaping savage cannibals, you arrive at the crypt of the leech king to claim your prize! But before adventurer Konrad Meridian can even finish his string of bravado about his exploits, a metal gate slams shut trapping you, the player, inside. Take on the puzzles inside to look for the legendary treasure - and just maybe make an even more daring escape!

Rogue Quest plays fairly faithfully to the point-and-click genre. Interact with elements of the screen by clicking on them. Access your inventory by clicking on the icon of the backpack in the top-left. You can also show all interactive elements in the scene by clicking the binoculars next to the backpack, if you run out of things to click on. If needed, there is a button to dispense hints, but they are quite revealing so use them sparingly! Between the Leech King, a vampyric abomination, and the locked door at the entrance, can you make your way out before the sun sets and seals your doom?

The in-game hints pretty much give everything away (in a very awkward order), but here's a walkthrough.

Dead guy on the floor in the very first room. Why did he die here? What was he killed by?

Take the wooden poles from the wall and look through the dead adventurer's bag to get an ancient knife.

Move right into the room with a demonic door surrounded by skulls. There's a small hole in the floor, and a grille blocking your way to whatever that shiny thing down in the old well is. There's also a clay urn filled with something sticky.

Move right, and you find yourself in an awkwardly small room facing a rickety wall. Punch it!

Apparently you're not as strong as you imagined, so punch it again! Take a broken brick from the floor. Examine the skeleton, and then pick up his iron leg. Take his diary.

Reading the diary gives you loads of information. Firstly, follow the skulls' eyes to open the skull door. Secondly, you can open the crypt entrance by destroying the Leech King, by destroying his phylactery, by putting it in a mix of remains of two undead creatures with fresh living blood and saying something magical. Simple enough.

Use the iron leg on the torch to remove it from its bolts.

Dip the poles in the sticky clay urn, then use one of them on the well grid, retrieving the phylactery and breaking the pole in the process.

Click one of the skulls on the side of the door, putting you in a minigame where you memorize the order in which the skulls eyes light up, and then repeat the pattern by clicking on the skulls.
From left to right and top down, number the skulls from 1 to 6, so that the middle-left skull is number 3.

Go through the door, which leads down a flight of stairs. You've placed your torch on the wall. There's a crack on the floor here, as well as a poster which links to A Tale of Caos' Steam Greenlight page.

The door on the right is locked, so move left. There's a vampire abomination. He's strong! He's fast! He's hard to kill! He's holding the sanctuary key! And he'll wait until night to drink your blood! And there's a mirror in the room just to prove he's a vampire.

A vampire's weakness is sunlight. And since there's no way to get him out in the sun, perhaps we could get the sun to him?

Go back to the vampire's room, where he's reduced to a pile of ashes, among which you find his key. Pick up the urn on the floor.

Go right and use the key on the door to unlock it. Go through to the Leech King's chamber.

Ooh, there's a treasure chest here. Maybe we could have some after we destroy him.

Talk to the Leech King, who's also a lich king, who's er... thinking of the best curse to kill you with, and has but one weakness you can defeat him with, and is too smart to tell you that his phylactery, being enchanted, would reflect his own magic.

Use the phylactery on him, and challenge him! To a magic battle!

He goes poof, and reduces to a pile of ashes. Pick it up, as well as the treasure. Now we have to destroy him properly.

Mix the vampire and lich ashes to get an urn of mixed ashes. Use the knife on your own fist (in inventory) to cover it in fresh blood, and then dip it into the urn. The knife has corroded away!

Use the phylactery on the urn (or the other way around), killing the Leech King.

Go back to the entrance, open the door, and you're out!

Very short and not-too-hard Monkey Island inspired game with a few inspired moments and some potential, but ultimately unsatisfying. The controls are terrible and really kill the game. Managing the inventory is a huge pain and you cannot interact with anything while the character is talking. These flaws are enough to make it a real chore to play and seriously detract from the otherwise engaging setting and puzzles. Would like to see more if these issues are addressed.