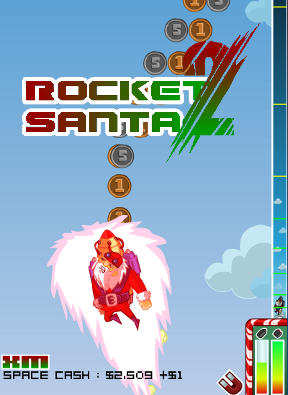 The year is 2020. Just in time for Christmas Eve, one of the elves gets a hold of some matches. One thing leads to another and BOOM! Presents are blasted into the stratosphere, just like that. Good thing Santa kept his rocket equipment from last year! In Rocket Santa 2, another seasonally themed launch game from Berserk Studios, Saint Nick once again gets to use his jetpack for the good of mankind.

Click to launch Santa from a canon to collect coins. Use coins to upgrade equipment so you can go higher. Collecting power-ups along your flight path can boost your height. Collect letters to spell xmas for a giant boost! Unlike the previous game, there are the missions you must accomplish to unlock all of the upgrades, shown to you between launches, and testing your Rocket-Santa-ness achieving a perfect launch, or collecting a certain number of coins. You even get cash bonuses for completing them since Santa is all about the cha-ching cha-ching. If you manage to fly high enough, you'll be able to reclaim the gifts and Christmas can go on as planned, so blast off ye merry Santa!

Merry Christmas to Berserk Studios, and Jay and staff at JIG.

I personally like how nothing got in your way but the upgrades seem kinda lacking. It felt more grindy and less rewarding. Great game but I enjoy Berserk Studios' other games much more. It a great game but honestly it not really something I would replay anytime soon.

It is awfully annoying how I keep clicking on the BubbleBox.com on the top, opening a new window and interrupting the game.

O and for anyone who want to know how to complete the fart challenge, just grab the tokens and get a losing spin. Trying to pull his finger during the loading screen does nothing, trust me I tried.

I agree with Redapaneda. This was extremely grindy compared to most launch games. A single launch earns you a pittance, and the upgrades you get feel weak and insignificant. Then, after all of that, when fully upgraded, you still don't get anywhere near the top. I can have powerups fully upgrades, and still not see them on every run. There is only the slightest hint of things you can do to improve how good your run is. Powerups appear and go by so fast, that you can't feasibly reach them most of the time.