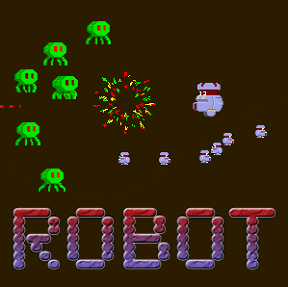 Oh, DHTML. We may not ever quite fully understand your often alchemical javascript manipulations of the DOM of HTML, but as long as Brent Silby keeps making awesome arcade games within your framework, you'll always have a place in our hearts and twitchy fingers. His latest is Robot, a cool little retro shooter where Robot must fly and Robot must blast untold hordes of Alien Invaders. What's more, Robot must protect his pack of adorable Baby Robots. And since, as everyone knows, Baby Robots are Alien Invaders' favorite food, Robot is not going to have an easy time.

Move Robot with the [WASD] or [arrow] keys and fire to the left and right with [ZX] or [NM]. Surrounding him is a number of Baby Robots, who will generally follow Robot's movements, with just enough random wandering to keep things interesting. Aliens will attack from the sides of the screen, and you must defend your brood. The game ends when either all of you Baby Robots have been destroyed, or when Robot loses all of his health. Knowing when to throw yourself in front of an attack, or when to sacrifice one of your babies will be key. New forms of enemies with new behaviors are constantly introduced, meaning players must change their strategy on the fly, which gets pretty exhilarating.It's hard to identify a specific inspiration for Robot, which is probably to its credit. Certainly bits of Space Invaders, Robotron, Defender, even a little bit of Galaga are present, and fans of those will have a lot of fun with this. Really though, Robot is its own creation and its classic arcade fun is a wonderful addition to Silby's body of work.

Huh. Vincent from the Disney movie 'The Black Hole'.

Thank you! I was trying to remember if that was Norby or what.

Yeah, Norby was Asimov's "Mixed Up" Robot, whereas Vincent was more of a "Low Budget" Robot.