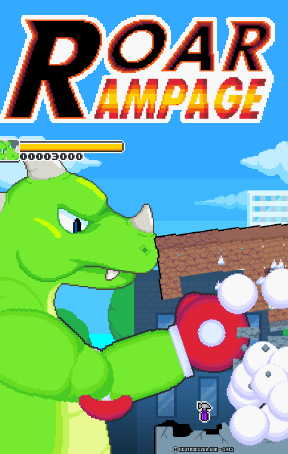 Ever heard the saying, "Let your fists do the talking"? Well, turns out that when you're a dinosaur, what your fists are saying is "SMASH PUNY HUMAN ARCHITECTURE, HOR HOR HOR HOR!" In Neutronized's reptilian destruction simulation Roar Rampage, you control a towering green beast with a fondness for boxing gloves and massive property damage.

Your goal is to rampage through towns where city planners probably never thought to add "giant dinosaur fisticuffs" to their emergency preparedness seminars, causing as much damage as you can and reaching the big red button at the end of the level. Move with the [A] and [D] or [left] and [right] arrow keys, and just swing the (mouse) cursor to swing your fists, punching and smashing your way through 15 levels of buildings, construction sites, and the army as you search for your kidnapped son. The more damage you do, the higher your score (which is all that really matters in life), but those puny humans won't just sit there and watch you; as you progress, everything from helicopters to snipers to wall mounted machine guns will be out to ruin your fun, so make sure to keep your dukes up and use your fist to block incoming fire. You gotta protect the face; that's your money maker.

Roar Rampage is one of those beautifully simple little ideas that's both a great stress relief and a lot of fun. Neutronized is by now known for creating slick bits of flash gaming, each one more creative than the last, and the design in here really shines. If there's any strike to be made against Roar Rampage, it might be that it feels a bit too simple at times, with its short stages and small stable of power-ups and weapons that seems to be begging for upgrade capabilities. The destructo-physics also feel like they're fighting you more than they should, with swinging your fist turning downright awkward in close quarters and getting hung up on a tiny piece of un-rampaged building is frustrating. Laptop users may also struggle with the amount of mouse movement required.

That said, however, there's still a lot to recommend here. Roar Rampage would not be out of place in an arcade somewhere, and the basic concept and premise is both weird and appealing in a way that keeps you coming back to it. It isn't particularly deep, but it is a great big, stompy, monster of an experience that is a fantastic modernization of the classic Rampage gameplay and a loving homage to retro gaming. Oh, and when you conquer the city? I suggest you name it "This Land"... and then brace for the sudden and inevitable betrayal.

50 Bonus points to Dora for the Firefly reference. I wasn't really impressed by the game, but that just made my day. :)

It seems a little unfair to me that you can get hurt by touching the spiked wall covers with your fists. Never mind that they're impervious to everything else, how are you supposed to get rid of those covers if you've not been given a weapon except by punching them & taking damage?