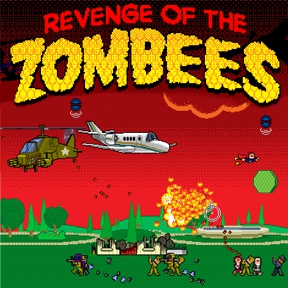 When you think about zombies (and who doesn't on a daily basis?), have you ever wondered why the undead plague is relegated to the human population? Couldn't dogs, cats, and the northern spotted owl be susceptible to zombification? And most importantly, why not bees? Yes, those flying pollinators we shrink back in terror from at picnics and other outdoor events could be prime candidates. The developers at Adult Swim seemed to think so, and they have even allowed YOU to control an undead swarm in their latest offering, Revenge of the Zombees.

Zombees? That's right. Where did they come from? Why are they attacking? In this game, it doesn't really matter. The point is to cause the maximum amount of damage and carnage across five retro-looking levels. Like Miami Shark, your killer members of the animal kingdom wreak havoc on everything from equipment and machinery, to buildings, tanks, and even planes. The controls are simple - just move the mouse around the screen and keep clicking at different areas to get the swarm to follow. Clicking on floating honeycombs and passing over stray bees will add to your numbers. Do more damage to fill your damage meter, and eventually your bees will catch on fire, causing even more mayhem. And that's about it. It's silly and simple fun, with excessive pixel gore we've come to expect from Adult Swim titles. Sound intriguing? Why not give bees a chance and exact some undead revenge on your next coffee break.

Play Revenge of the Zombees

Whilst there's a simple pleasure to be had in clicking on things until they explode, it would have been nice if there was a little more here.

Fun until you clicked on something just off the game area and it redirects you out of the game. :p

The ending of this makes me forgive adultswim for the lack of an ending on Titan Lunch Retaliation.