Who would have thought having a zombie apocalypse in your pocket would bring you so much joy? It's been a year since Sarah Northway's immensely popular survival strategy sim shambled out of your browser and onto your mobile device, and what better way to celebrate than with an update that allows you to inflict even more misery and mystery on your hapless band of struggling survivors? Now updates with the challenge of winter, new endings, and secret events, Rebuild for your iOS, Android, and Kindle Fire is better than ever... and now on sale for just $0.99USD! 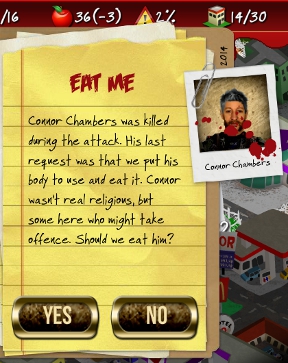 If you're not familiar with the series, there's no time like the present to get acquainted. The game tasks you with handling the survival and growth of an initially small, struggling colony of people after a zombie outbreak effectively brings an end to the world as we know it. You'll need to ensure you have enough food for them by capturing and cultivating farms, but also enough housing, and though sending them out on missions to build, recruit other survivors, scavenge, and more may be dangerous, it's the only way to proceed. The simplest way to victory is to reclaim a certain amount of buildings from the city you find yourself in, fortifying them against further infestation after you clear out the undead, and eventually reestablishing a government. But that's not the only way, and the game is packed with endings to discover that depend on the choices you make during certain events, and how you choose to spend your time. The game lacks any real "hands-on" action, consisting mostly of decision-making and resource management, but manages to strike a perfect balance between approachable depth and customiseable challenge so that both longtime fans of the genre and newcomers alike will find a lot to enjoy.

There's no denying that all developers put a lot of heart and soul into their work, but Sarah Northway's dedication to her popular series is particularly impressive. She continues to work on and expand it, and the result is a robust and addicting experience about people getting their faces eaten... or, uh, in the case of this update, potentially eating each other's faces. You can still play Rebuild and its sequel for free in your browser, though only the mobile versions have received this latest update and have considerably more content and customisation. Who can say what else the future may hold for the series? In the meantime, it's the perfect time to get your hands bloody rebuilding the world (or maybe just settling down into your own Cabin in the Woods... ?) however you can. Just... don't ask me for help. Apparently I'm not so good at managing colonies. Or negotiating with traders. Or recruiting survivors. Or not eating corpses. Maybe, uh. Maybe I should just sit here quietly and let you handle everything...

NOTE: This game was played and reviewed on an HTC One X. Game was available in the North American market at the time of publication, but may not be available in other territories. Please see individual app market pages for purchasing info.