Realm of the Mad God 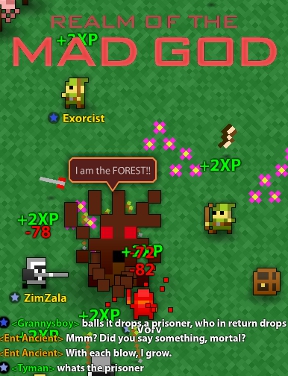 Wild Shadow's Realm of the Mad God (hosted here with kind permission of the developers), a multiplayer, co-op, fantasy RPG shooter, has been around for a while, but if you're like me, you may have been hesitant to try it. After all, free MMORPGs are a dime a dozen, and the quality can greatly vary. However... if you're less interested in doing quests for random NPCs, working on skills, and generally behaving yourself in orderly combat than you are blowing things the heck up, you really need to give Realm of the Mad God a try. Join hundreds of other players online in a hectic, dangerous world as you work together to topple endless swarms of enemies, ancient titans, and even, eventually, the Mad God himself. It'll take fast fingers, a lot of luck, a lot of bullets, and even some teamwork if you hope to topple a God... but maybe you should work on staying alive for more than five minutes before you start tackling deities.

While you only have access to the wizard class in the beginning, other classes will unlock as you play and gain levels and fame. Use the [WASD] keys to move around (or configure those to your liking via the options menu when you're at the Nexus) and the mouse to aim and shoot. Any items you pick up, if they aren't equipment, can be used by [shift]-clicking on them in your inventory, or hitting the appropriate number hotkey. Kill enemies to gain levels and equipment, and stay alive for as long as you can, which is kind of important since death is permanent. If the character you were playing bites the dust, you'll be forced to start all over again with a brand new, level one hero and a big box of tissues to cry into.

The game is pure combat, and you'll spend your time running around the world, chasing "quests" (bigger, meaner special monsters) and helping out other players; whenever an enemy is slain, everyone onscreen gains the same amount of experience points, but treasure drops to the ground in the form of a bag that anyone can loot from, so you'll need to be quick to get your share if anyone else is around. If things get hairy, you can press [F5] or the little temple icon to teleport immediately to the Nexus at any time... yes, even if a beholder is in the process of trying your face on for a hat. 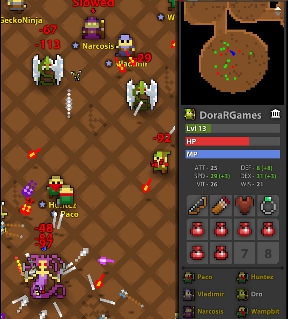 For most players, the most important place in the game will be the Nexus, a safe spot where you can take a break, meet and team up with other players, trade without fear of monster mash, and make use of the Vault. The Vault (no, not that one!) is where you can store items for use by any future character you play; you get once chest to store items in for free, but the rest need to be bought with Gold... something you can only obtain by spending real world cash. Fortunately, the game is fully playable without spending a dime. If you're having difficulty going it alone, remember that you can click on any green dot (representing a player) on the minimap and instantly teleport to them to take part in whatever monster blasting they may be undertaking. Just remember that while elves may be the snotrags of the forest, but Ghost Kings are another story entirely...

Analysis: If you go into Realm of the Mad God wanting or expecting a traditional MMORPG experience a la, say, Ultima Online or World of Warcraft, you're going to be disappointed... namely because this game has less in common with them than it does an arcade blast-em-up. The fact of the matter is that it's a fairly simple hack-and-slash online fantasy shooter, but it does what it does extremely well. The worlds are fairly massive, packed full with a wide variety of continually spawning monsters, champions, and secret lairs, and lots and lots of treasure. The realtime gameplay is so hectic that it can be more than a little intimidating at first, but fans of fly-by-the-seat-of-your-pants action shooters will feel right at home.

Perhaps more importantly, however, is that the game is just more fun with a group of people. After adventuring solo for a while, I started using the minimap to teleport to wherever there were large groups of people and just helped out; it really let me see the tougher battles the game had to offer, and made me feel like I was part of the group. You should also join a train (a group of players headed in one direction blasting everything in their path) at least once; it's a great way to gain levels, and, while chaotic, is at times more entertaining than it has any right to be. 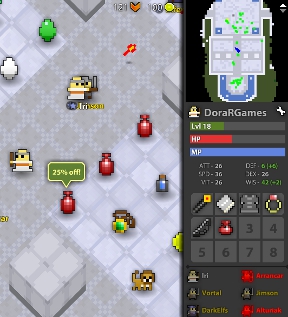 At the same time, however, there's no denying in that it can get fairly repetitive, and it might not be the sort of game you can or want to play for hours at a time. Realm of the Mad God feels like its best enjoyed in short bursts, teaming up with a group of players for a few climactic battles before you get too cocky and wind up reduced to a fine cloud of particles. While there's no shortage of monsters to tackle, large and small, and a whole lot of areas to explore and treasure to find, the gameplay will probably only hold lasting appeal if you're a real fan of the mechanics.

Realm of the Mad God is unique, chaotic, fast-paced fun best enjoyed with a group of buddies and a Dr Zoidberg whooop-whoopwhoopwhoopwhoop! mentality. While the hectic gameplay won't be for everyone, and players hoping for a more "thou art" approach to a fantasy game may be disappointed, if you embrace it for the action-packed jump-on-in experience that it is you'll have a fantastic time.

Play Realm of the Mad God

Thanks to John, KMB, Agustin, Spacemarine9, Yemdx, Darren, and Ironimp for sending this one in!

haha nice game , i played it before :) btw does someone know how to fix error 2048? i asked in the forums , and everywhere ... oh here is a little secret :

Drink Rum and eat Mushroom at the same time and see what happens :P

How do you sell items that you pick up? Or is there some other way of earning gold?

FINALLY this game is getting some publicity; first on Kongregate and now here. AWESOME. I love this game so much.

@Zengief: You can't SELL your items, per se, but rather trade them to other players for items your current character can use. Gold past your starting 100 can only be obtained by purchase with real $$$.

This game starts with a concept I like and then goes every direction I hate from there. 1 Shroom.

Yeah...I agree. I prefer to solo my way through, and it seems to try and push you towards team-play.

One question: how do you change your class. Do you just stay whatever you start as?

@Nonny: It's possible for people to solo monsters, dungeons, and even events, it's just harder to do so than in a group.

How does one choose a unique name and access trades? Is that a "premium" option as well?

A couple of questions I can answer: you change your name by talking to the gold knight guy in the start of the Nexus. On changing your class, you kind of can't; you must create a whole new character. When you do, you'll have the option to choose any of the classes you've unlocked (hint: getting a Wizard to level 5 unlocks Priest).

I really, really love this game, even though I'm definitely more story-oriented when it comes to my games. My only complaint is that a few things seem more...clumsy than they could be. You can't use arrow keys, you can't use the number pad, and using potions is so unwieldy that I never do it. It's sad, because that clumsiness is such a contrast to the rest of the game.

All keys are configurable, including hotkeys for potions.

I've not yet managed to play this game. I always get the 2048 Error. The various forums are no help. The main advice seems to be 'try a range of different things, then try again'. Conclusion: not user friendly. I'll probably give up.

[I understand your frustration. What OS, browser and Flash Player are you using? I can try to reproduce the issue. Also, what country are you playing from? -Jay]

I have been in deep RIFT withdrawal since returning to school this fall. I've only managed 2 or 3 sessions lasting more than 45 minutes :p This game is the perfect answer for me! I can squeeze in a quick hack-n-slash between classes without a lot of character prep or worrying about resources.

I'd like to note that while the game pushes you towards co-op it is very playable single-player, and many monster fighting strategies only work alone (eg running around in circles so the enemy's always aiming where you're not - multiple players confuse their aim)
and alone you get all the items

What button do I press to exit the nexus?

Jodi, you must enter a realm portal to get out of the Nexus.

I keep getting a security error when it's trying to connect to the Djinn server after defeating the butcher quest. I've confirmed my email when I signed up. Anyone else getting this error? ideas?

@Phelios27: from what I've been told by the developers, that happens every once in a while. They say that usually it's an app engine error, and it should go away after a little while.

sorry , figured it out

How do you get a mushroom and some rum?