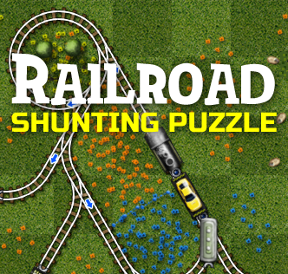 Fulfull your childhood dream of being a train conductor in Romamik's puzzle game Railroad Shunting Puzzle and its sequel Railroad Shunting Puzzle 2. Both games share the same gameplay, which tasks you to get the correct train car to its matching station. Drag the engine along the track to automatically connect it with any cars on the track. Click on track junctions to change the direction you'll travel, which is indicated by an arrow. Click between train cars to disconnect them.

Your score in the first game is calculated by how far you moved the trains on the track, but in the sequel it depends on on how many times you change the direction the train is headed. The second game is more than just an additional level pack, adding several more puzzle elements, such as trains that cannot disconnect from each other, and cars that can only be joined from one side. While the controls are easy to pick up, the puzzles start to bend your brain before too long... especially if you're going for the gold on each level. And if you can't get enough, there's a level editor to create your own puzzles. The only thing it's missing is a button for blowing the train whistle. Choo choo!

Man, this is hard getting the golds. Was able to do it on the first 4 levels but nothing after that. And the video walkthrough doesn't even try to get the gold.

Got level 5 in 453m. My previous record was 473, 3 short of gold. Did everything just like I had been, just managed to stay a little closer to the switches.
Not sure if I like having to split hairs like that.

I like the sequel better. You don't have to park in just the right place so as to not move too far. Just make sure you don't change direction if you don't need to.