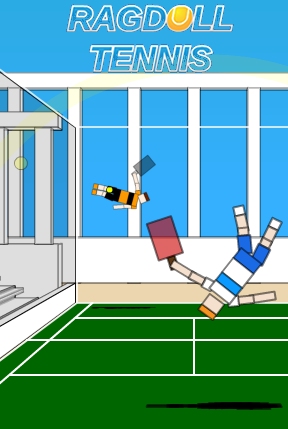 Ragdolls may have soft, dopey bodies, but they have hidden talents. Apparently when they're not fighting off alien invasions, they like to organize tennis tournaments. Now you too can hammer desperately at your [arrow] keys while your ragdoll body floats nonchalantly towards the ball in Ragdoll Tennis

Ragdoll Tennis is one of those games that seems absolutely impossible when you first try it, so don't get discouraged at first. You control your floppy Pete Sampas with either [WASD] or the arrow keys. Your number one priority, of course, is to hit the ball with your square racket, but depending on your speed, spin, and other factors, you can make "super" or even "special" shots that are harder for the other side to block. Train up against a wall, and then enter tournaments. As you defeat opponents, you'll earn points to improve your character's stats and unlock customization of his colors. Word to the wise: max adrenaline first. It's by far the most important stat.

Although the game has a definite learning curve, if you stick with it, there's a lot of fun to be had with this one.

Thanks to plasmasheep for suggesting this!

This game is fun once you go with the Adrenaline advice. Can't wait until I'm just a floating, powerful tennis racket.

Jimmy, the last guy in Amateur, is THE DEVIL. My arms are gonna fall off from banging them on the desk so much.

Reece: I got a flawless victory on my first try against Jimmy (no trajectory help). I had maxed adrenaline and put 3 points into shot power.

It's difficult at first, but it really does get fun towards the end. You'll think it was too short by the time you finish it.

Also, thrilled to have my submission accepted :D

Finished! Got easier after the amateur league when I started learning the ropes, but quite difficult again at the end. Definitely the best tennis game on flash that I've played.

Tuco Sentenza was a great little homage to The Good, The Bad, and The Ugly. Fun addition to a great game.

As a matter of fact, I'm pretty sure most if not all the names are of movie characters... Hmmm, further investigation necessary.

I ignored tutorial mode and jumped right in...So far I haven't found general play all that difficult--just remember that the racket is the "pin" on which the ragdoll hangs, and it starts to make sense. I lost my first, er...round? But then beat Ferdinand soundly in the rest of the match.

I don't quite know what makes the special moves occur. Still, this is kind of a goofy fun diversion!

The super and special shots seemed to be dependent on the velocity of the racket when the ball was hit. So you should try and line yourself up so you can press and hold (to accelerate) a single key or two to just reach the ball (ie horizontal, vertical and 45 degree diagonal movement). Either that or put yourself into a mad spin :).

Personally I found the some of the effects annoying on my slow laptop. Full screen fade-to-black and smash-explosions made by cpu spike (damn flash!) when I needed smooth graphics the most, making smash-returns trickier to pull off. That is the only thing I would optimize. And make the game longer and network friendly ofcourse.

Has anyone gotten all the achievements? I've gotten:

I got those last two at the same time. It was a pretty crazy hit. Somewhere in the last tournament, I got a special hit, he returned it; I got a super; he returned it with a second super; I got lucky enough to hit it back one more time. At that point it was crossing the field in a fraction of a second.

For the other two achievements, I'm guessing one involves hitting the ball with the racket moving extremely fast, and the other something to do with bouncing the ball off the walls...

Why does my charachter keep getting stuck?!

I'm sure that this game is fantastic, but I don't know what's going on with my character. It may be like some arrow key games, where it's not playable because the character will only obey one third of the time, and the other two thirds it acts like I'm holding down the last arrow key, (only some games, mind you) but it's so difficult because my guy will sometimes deside to fly into a random corner. And stay there until it restarts. Sorry, this game's just not working for me.

Chicken, the last achievement you're missing

Would've liked something unlocked for getting all the achievements, but still excellent game.

It's unique and moving is not tough anymore if you upgrade weight and speed. I'm playing the last difficulty (grand bash?)

It seems that the arrow key is used to move your racket instead of your body.
Also, this is a physics game, so you play better if you know physics :P Those most powerful shots aren't made by arrow keys, but by the moment of your arm. However, it's not hard to make a shot go super. You just need to charge.

I found that super/special shots were determined by when the ball was hit, in conjunction to how fast you went at it with. The farther back the ball goes, the farther the player goes, and the second you touch the ball it you move forward to your original position. That's your forward speed.

My strategy was just upping my speed and spinning madly. Super strikes every time, baby.

All I could think during this game was "What a unique concept!", "This is somewhat slow" and "Would wearing orange pants distract your opponents in a real tennis match?" But mostly that the game was rather slow. If there's a button to skip the score and such, I haven't found it.

In addition to the ones listed by ViciousChicken and the tournament trophies, I got

Rocket Racket (top left corner achievement): "Awarded for striking a ball with the mind-blowing speed of more than 50 m/s"

Don't know what the one that looks like the ball bouncing off the wall is. I figure maybe a long enough streak or hit against the walls would do it. Not sure.

Those best players are actually easier to win, because

they do only a little super shot as they reach the spot very early, and has insufficient velocity to do a super shot at the time. However, if your super shot didn't hit the right spot, expect a very fast ball.

For some reason the game is not saving my progress. Is there something you need to do in order for the progress to be saved?

Finally got the last Achievement. From left to right, they are:

Wall Master must be done in training - it's 30 hits in a row.

Finally, Flawless Victory is just what it sounds like - don't let a computer opponent win a single point over the course of a match.

This is a terrific little game - it really grows on you. It's particularly entertaining to play if you picture it as it would look in real life.

I perhaps should point out that the original author turned up in the comments on Kongregate when it was posted there. He mentioned that he wasn't very impressed that it had been uploaded without his say-so - apparently, it's licensed exclusively to Gamesfree. Is it kosher for us to rehost it here? Sorry if this isn't the sort of thing to bring up in comments - I'm certainly glad you posted it, as I never would have discovered it otherwise!

I really understood this game becuase every time I try to serve in real life I also flail in the air like a lunatic.

I can't be the only one that wishes tennis players where actually like this.

I like to pretend that the players are ninjas who have their entire bodies numbed for the game.. so they can do awesome-looking moves and stuff in an anti-gravity environment

Bizarrely, it was much easier to beat the last player with 0 points than all 30 - I imagine because the AI doesn't compensate properly for really slow shots and drifts towards the ball far too gently.

Finish the game, and want some extra fun? Try playing "wooden racquet" style, and see how far you can get without ever buying any increases in skill -- no matter how much XP you earn! So far I'm stuck on Jean Leon, and I'm sure it's only a matter of time there-- I'm managing to average winning one set out of three against him.

This is a game that could really use a multiplayer version.

Well, i completed the game (without losing once!) and now i've followed Quin's advice.
I'm playing without the use of any powerups.
It's actually really hard this time.

And, i've gotten my first loss.
I lost to Marat Serafin.

But how do you get the achievement called 'Rocket Racket'?
I've tried anything, but my shots doesn't seem to be hard enough...

Beat the final character with a flawless game, all but 2 points, and my final shot was a super shot that I hit with my elbow. Epic win.

This game was fun, but networking would have made it better.

You need to be moving at 50 m/s to get that, meaning you need to have all 5 speed points and be moving fast before you hit the ball. I got it in training, no problem. Spinning helps if you can hit it. Adrenalin DEFINATELY helps.

I found a flaw: If you lose a serve twice, you lose, but next serve you only have to lose once. It apparently doesn't reset the counter.

I have a question about JayIsGames hosting games like this one. Do they usually contact the author for games they want, does the author have to ask first, or does JiG just grab the game without asking?

I absolutely love this game. Best implementation of a tennis game I've ever seen. Though it's wonky to think about controlling the racket (with the 'person' hanging off of it as a dead weight), by the time you're acclimated, it's the most natural and realistic simulation you could imagine. This has the same sort of depth and complexity (though not as much) as actual tennis.

[We try to contact most authors, yes. Most Flash games thrive on spreading virally across the Web, and their authors profit from this due to the ads they contain. So, most authors are more than willing to provide permission to host their game. A few do not, though, crazy as it may sound. -Jay]