Hexage, creator of Evac and Everlands, pits your human military prowess against endless alien swarm in this mobile tower defense game, Radiant Defense. Defense of your spiral reactor (which looks oddly like a stove burner) is the number one priority since it keeps out those pesky invaders from, you know, destroying all humans. Radiant Defense definitely keeps elements that you would always expect from the tower defense genre, but you remove the predetermined path and get the ability to create the path they will follow to their doom (hopefully). Lasers will fly, aliens will die, and the entire time your fingers will be nimbly working to hold off a rather comically bad invasion story unfold. 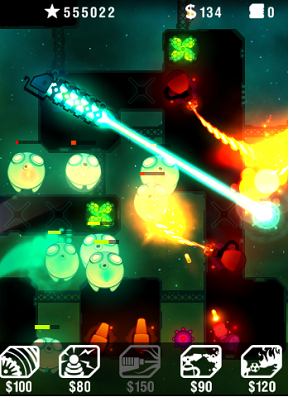 At the start of each level, the alien's path is shown via a line of purple squares and you can set up your defenses accordingly. You cycle through the defenses on the bottom on the screen and put them on any black space called a "module" by double tapping the open space. Some modules are already placed on the level while each wave gives you more to place wherever you want. Turret upgrades and placement can be done on the fly and before invasion waves start so that the last minute rocket turret can save your reactor from extraterrestrial eradication. After holding back the final wave of the level and your spiral reactor is relatively unscathed, the level is completed and you move on to more difficult challenges.

The game makes you glad that the tower defense genre hasn't gone completely stale due to its saturation across the internet and mobile marketplaces. The player-created paths is the most enjoyable part of the gameplay because you have even more control of the battle than normal. This little-used path creation mechanic is enhanced by the Geometry War-esque vivid colors that make the game so 'radiant'. Each enemy has its own unique stats and defenses so the defense of your reactor is always changing for added difficulty. The tiny comedic quips weaved into each level between the Commander and Alien Leader adds another level of enjoyment to keep you more invested in Earth's defense. The game is depressingly limited to one mobile market at the time of this review, but there is hope on the horizon when it gets ported to Android and iTunes App Store soon. The radiant universe is a great addition to your tablet gaming experience so the three dollar charge is perfect when it has such a high replay value and multiple defensive strategies to utilize.

NOTE: This game was played and reviewed on a NOOK Color. Game was available in the North American market at the time of publication, but may not be available in other territories. Please see individual app market pages for purchasing info.

The game is quite fun and there is a level of randomness as the aliens move slightly differently every time so even if you fail, you can try again and you might pass. And you can also retry the wave you are at, not restart everything once you lose your lives. So, it is a good game

I've made it through to the end of level 8 without purchasing any of the power ups but can't defeat the final wave. If anybody has managed this then I would be interested in tips.

We just created a cheat trainer for this game. So if you are stuck or just want to brag about your skills try it and give us some feedback ;) You? can get it in the play store: play.google.com/store/apps/dev�eloper?id=Igor+Kalkov

This game, along with many others, is also available for the BlackBerry Playbook. That's what I use to play it.